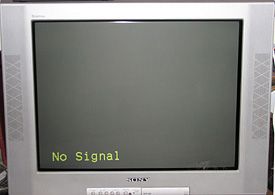 Hundreds of people called in with problems and more than 1,800 called a special FCC hotline, but broadcasters said that on the education front, at least, they did their job.

"Many of the consumer problems that they saw in Wilmington were quite mundane," said Jonathan Collegio, NAB vice president for the digital transition. "You had a range of people that had purchased converter boxes, but had not plugged them in yet, and who, frankly, hadn't read the instructions."

Plenty of North Carolina viewers failed to receive all signals. Local station managers likened the wayward viewers to those scrounging for water and batteries from near-empty stores just before a hurricane.

But some people followed all the instructions exactly and still couldn't get all the stations they had before. In particular, a new transmitter location for NBC affiliate WECT meant out-of-market viewers lost the channel, and even a new and improved antenna might not help.

FCC Chairman Kevin Martin, in a U.S. House hearing Sept. 16, said that about 15 percent of markets nationwide might lose at least one channel. He said the FCC was looking into solutions.

The Wilmington transition also brought some winners. WILM, the local CBS affiliate, switched from low-power to full-power status and expected to reach many more viewers.

Those who can still receive WECT are being treated to its new high-definition broadcasts along with those of Fox affiliate WSFX-TV, its operational partner.

And Andy Combs, general manager of ABC affiliate WWAY, has said he expects the great digital pictures will lead to more over-the-air viewers, not fewer.

Looking at the numbers another way, only 14,000 households in the Wilmington market were over-the-air dependent. With the 1,800 calls the first week plus a few hundred more to broadcasters and local call centers, that's more than 10 percent of the number of over-the-air viewers—although some calls undoubtedly came from outside the 14,000 in the market.

At the House hearing, some members, including top panel Republican Cliff Stearns (Fla.) seized on the FCC interpretation as evidence of the success of the program. Others, using the same numbers, extrapolated that hundreds of thousands or even millions of viewers might be moved to call the FCC after the transition. And much of the nation faces more profound transition challenges than Wilmington, which enjoys a small over-the-air population and had the benefit of unprecedented government and industry outreach.

Still, broadcasters highlighted a lesson of the experiment: Remind people to turn on their converter boxes, to scan for channels and, if necessary, to get new antennas.

Even as broadcasters celebrated the success of their educational efforts, they acknowledge that the message now has to move well beyond coupons and a date in February.

"The main thing is education on use of the converter box and continuing to talk about the antenna," said John L. Greene Jr., vice president for special projects with Capitol. He suggests expanding educational efforts to include box operation and installation.

"Nationwide, stations are going to have to tell their viewers to re-scan," said the NAB's Collegio. "Otherwise they're going to get tons of calls from folks who otherwise have done everything right."

The National Telecommunications and Information Administration reminded the procrastinators to allow four weeks from ordering their $40 coupons to installation.

"It is critical that over-the-air consumers act early to prepare themselves well in advance of the transition date, so they can avoid any rush that might occur at the end, and to give them time to troubleshoot any issues that might arise," said NTIA spokesman Todd Sedmak.

FCC Commissioner Michael Copps, who first suggested having a test market, proposed a nine-point plan for the stretch run. He included education on antenna issues, including additional field testing and "the rapid deployment of small, battery-powered DTV sets."

The Wilmington region and its Sept. 8 big day faced potential impact from weather systems Hanna and Ike, and the broadcasters are leaving their analog signals on for 30 days after the supposed shutoff, the better to easily fire up in the case of emergency.

Broadcasters agreed that no matter what they do, some people—like those who wait until the last moment to prepare for the hurricanes—won't act on the messages in a timely manner.

At the House hearing, NTIA boss Meredith Attwell Baker, said the educational effort needed to be for consumers to apply (for the coupons), use them to buy converter boxes and then try them out. Her testimony came days after the NTIA requested legislation that would allow it to use $7 million of its other funds to pay for administrative costs for remaining coupons.

Mark L. Goldstein, director of Physical Infrastructure Issues at the U.S. Government Accountability Office, said the NTIA had no plan to handle an expected surge as the transition date approaches. Baker said such a plan was in her legislative request; panel Chairman Ed Markey (D-Mass.) asked her to come up with more details.

Prof. Connie Ledoux Book of Elon University in North Carolina has been studying the transition and had students staff a call center. She had extensive recommendations for the subcommittee. She said announcements about the transition should occur more frequently, during more popular programs and with a greater sense of urgency.

A wave of calls came when Oprah aired at 3 p.m. on Sept. 8 in Wilmington, Book said.

Instead of just airing during the 6 p.m. newscasts, she recommends hitting people during their must-see, primetime shows. She even recommends treading on the thin ice of a possible test shutoff during the Super Bowl in February. That'll get the public's attention.

She also called for more information about the switch at retail outlets, and for the broadcasters to make neighborhood-level analyses of signal strength, with relevant antenna information available at converter box retail outlets.

Broadcasters are the ones with the most to gain and the most to lose from the transition, she notes, calling on them to take on the ultimate responsibility for keeping viewers informed.

Several of her suggestions should be easy for broadcasters. For example, when doing a Wilmington-style soft shutoff with a slate of information ahead of an actual analog shutoff, why not run a loop with instructions about obtaining coupons and installing converter boxes? People would rather help themseves than call a government 800 number, she said.

If there are going to be hotlines, then why not make them to local call centers, to people who know the community, its stations and its needs?

Book said many of the last people to be reached will be the ones for whom the switch is most difficult, such as the elderly. She recommended broadcasters undertake some emergency plans, possibly even stocking converter boxes themselves for the final few.

The other lesson from Wilmington, she said, is that it was a success, however one looks at the numbers. "The most important message we got from Wilmington is that people trust the government and made the switch."