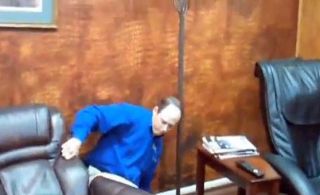 WASHINGTON: David Harmon, general manager of G&C Tire and Auto in Chantilly, Va., was in the middle of a promo shoot when yesterday’s 5.8 magnitude earthquake hit 80 miles south in Mineral, Va. Harmon’s about to pitch the new waiting room when it started to shake, rocking a nearby floor lamp and sending him to the floor.

“You feel that?” he asks the shooter, owner Gregg Caldwell, who was shooting with a Flip camera, according to Modern Tire Dealer. All 22 shop employees and the customers at the premises emerged unscathed, but slightly shaken. (Story continues below video.)

The Virginia earthquake provided yet another example of how world events are being caught live by everyday people wielding camcorders and connections to social media. Amateur footage abounded after the March 11 tsunami. CBS News picked up a clip of boats being overturned in the fishing port of Miyago, Japan soon after the event. News of Osama bin Laden’s death was first leaked on Twitter, according to The New York Times. More nefariously, British authorities determined that the recent riots in London were exacerbated by two men promoting them on Facebook.

In AP raw video from yesterday’s events, footage of the White House shows Secret Service agents scrambling off the roof. Another shows a news conference breaking up in the middle of the quake. A CNN iReport shows a pharmacy technician in Chester, Va., leaping out of a window.

The Virginia quake overshadowed another measuring 5.3 that took place in a sparsely populated area of Southern Colorado near the New Mexico border. No injuries were reported in that quake, the most intense in that state recorded since one rocked Denver in 1967. That quake, according to the U.S. Geological Survey, took place in an area of “seismic swarms,” where more than one earthquake took place over several days. The U.S.G.S. said that since August of 2001, eight shocks of magnitude 4.0 or greater have hit the area.

The East Coast quake occurred in what the U.S.G.S. refers to as the “Central Virginia Seismic Zone,” which has shaken since the 18th century, it said.

“The previous largest historical shock from the Central Virginia Seismic Zone occurred in 1875,” the agency said. “The 1875 shock occurred before the invention of effective seismographs, but the felt area of the shock suggests that it had a magnitude of about 4.8. The 1875 earthquake shook bricks from chimneys, broke plaster and windows, and overturned furniture at several locations. A magnitude 4.5 earthquake on 2003, Dec. 9, also produced minor damage.”

Buildings across D.C. and the surrounding area were evacuated in the wake of the quake, where bomb threats are a regular occurrence. One person whose downtown office building was evacuated said it was frightening not knowing if it was a quake or a bomb “or whatever.” On Sept. 11, 2001, the ground across several square miles of nearby Northern Virginia undulated as with a rolling earthquake after terrorists diverted a commercial airliner into the Pentagon. Security details and threat levels have intensified every year in September since then.

Damage is still being assessed in and around the capital. Most notably, the 104-year-old National Cathedral sustained structural damage, according to NBC Washington. Cracks were found in the Washington Monument, the 555-foot marble obelisk on the Washington Mall. Several schools were closed, and many federal facilities allowed staff to take unscheduled leave. ~ Deborah D. McAdams