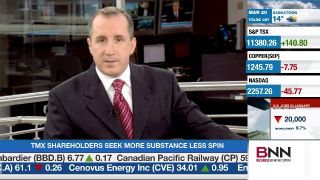 SAN FRANCISCO—Whether it’s to revamp a tired look or prep a station for the national election this fall, broadcast stations are taking a new look at the process of building up their newsroom graphics.

A number of key solutions on the market are promising to help more stations create such looks, like Avid, for example, whose Avid Motion Graphics solution handles character generation and full 3D animations. Or Harris, whose Inscriber line of solutions is being used to help broadcasters differentiate its brand.

One of the goals was to be able to more efficiently broadcast a variety of unwieldy financial streams—such as live data streams from indices like NASDAQ and S&P 500—as well as weather and traffic reports. And all needed to be tied together in a succinctly delivered, smartly branded look.

“One of the benefits was that we were able to help them consolidate multiple platforms down into one, allowing them to take data from many data sources and manage those streams through one box,” said Shaun Dail, vice president of sales and marketing for Orad in North America.

“I think the biggest benefit is their new look and the new ability to handle multiple video streams,” Dail said. “There’s also the speed of the data: stock market data can be turned around very quickly.”

The new setup replaces a non-integrated graphics and storage system, leading to more efficient and accurate handling of graphics and data streams. The system also allows for specific data to be updated in real time on independent intervals, including a headline and Twitter bar, two stock ticker crawls dedicated to international finance data, a date and time bar, weather crawl, real-time trading data bar, and a promo window for live streaming or upcoming promotional data.

ENDLESS POTENTIAL
A few hundred miles south, the goal was the same: prep and retool a news graphic presentation, and do so in preparation for the Super Tuesday elections. That was the goal for station WRCB in Chattanooga, Tenn., primarily when it came to their news graphics offerings. “On election night when it mattered, it performed perfectly,” said Derrall Stalvey, news director at WRCB of the Chyron Channel Box, a channel branding and graphics solution. “For [its first time], it went off without a hitch.” Using Chyron's Channel Box channel branding and graphics solution, WRCB was able to achieve a Top-10 market graphics look. Channel Box features a 2D/3D rendering engine, the ability to create automated promos and credit squeezes, and the ability to be monitored and controlled remotely. WRCB used the system to deliver up-to-the-minute breaking news, headlines and data.

That’s not to say that the newsroom graphics solution—like many on the market— was a simple plug-and-play solution that was simply plugged into a network’s existing infrastructure. “I wouldn’t call it an easy system to learn, as training is absolutely necessary so you have the aptitude to get it,” Stalvey said. “You can’t just pull it out of the box and go.

“But it has endless potential if you invest time in the training,” he said. “When you invest the time, it pays off.”

The benefit has been that the new solution has allowed WRCB to stand out visually. “No one else [in the market] visually can compete,” Stalvey said. “We’re market 86, so we don’t look like a top-10 market. But this product made our election coverage look as good as the [big networks]. There was no drop-off in polish or professionalism.

“In fact, when we did the local results [from the election coverage], we had to make sure that viewers knew they were still looking at local news,” he said.

The station has built it into its newsroom strategy, and while they aren’t currently using it for sports graphics, they plan to add data feeds for weather and local headline news down the road, Stalvey said. “Phase one was getting the election on the air; two and three will be incorporating it into our everyday workflow,” he said.

“It’s given us a new level of professionalism,” he said. “If you’re in a medium or small market, [it has the capability of helping you] look like the major markets.”