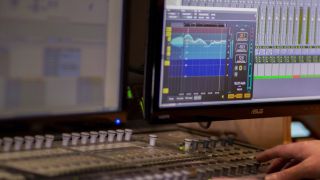 LONDON—In today’s IT-dominated world, with its increasing reliance on virtualization, it would be easy to assume that the physical audio monitoring unit (AMU) is becoming as archaic as the cathode ray tube. But while there is greater reliance on software, hardware is not completely out of the picture.

“Although over the longer term we envisage a gradual change from hardware to software solutions, currently the two go hand-in-hand and remain totally complementary to each other,” comments Kim Templeman-Holmes, vice president of sales and marketing at Wohler Technologies. A general mix of the two, he says, is still preferable, something reflected in Wohler’s current range of IP monitors. These, he explains, are “significantly more software reliant than our older products,” with representational state transfer [REST] infrastructure technology and APIs facilitating remote access and control.

Wohler’s main AMU range is the iAM (intelligent Adaptable Monitoring) Series, which includes the iAM-Mix, with its “straightforward” front panel controls, and the iAM-Audio, offering interactive touchscreens. The company’s most recent product is the iVAM1-1 audio-video monitor, which was due to ship in July.

A new AMU that is a major advance from its manufacturer’s previous models is the TSL Products SAM-Q-SDI. Audio product manager Stephen Brownsill describes it as “80% software and 20% hardware,” adding it is “very different” to TSL monitors of the past.

“The whole industry has been undergoing a gradual shift from purely hardware solutions towards hardware and software and most recently to software only,” Brownsill says. “Using software presents opportunities for us to measure audio levels and visualize them in a variety of new ways. Sound engineers can now freely select different audio scales and set the appropriate audio reference level with ease.”

Nugen Audio produces a range of software-only systems for a variety of applications, including the VisLIM loudness meter. Product specialist Freddy Vinehill-Cliffe says there are “plenty of people who still use hardware loudness meters” but that, increasingly, sound engineers are recognizing the “convenience” of software-based units.

“The main draw is that there isn’t really a practical way to measure loudness faster than real time using hardware,” he explains. “Loudness is measured over time and small changes to a mix result in a full re-measure, which can take an hour. Software-based solutions have time-saving features like real-time loudness measurement and the history function.”

Vinehill-Cliffe says work to improve loudness measurement is “constantly ongoing.” This is shown by loudness featuring heavily in the ATSC Recommended Practice document Conversion of ATSC 3.0 Services for Redistribution and the (at the time of writing) forthcoming release of a revised version of the EBU R128 standard. Loudness standards are being updated so they can be more effective for high definition and streaming services.

At Wohler, Templeman-Holmes says the company “tries to be ahead of the game on any technical revision or innovation” by reviewing either new standards being developed or any changes to existing guidelines. “To a large extent our customer base drives our development,” he says. “If there is sufficient demand we will develop a solution.”

It would be fair to say that another example of this approach is how AMU companies have handled the increasing use of audio over IP (AoIP) in broadcasting for networking and connectivity. RTW already offers both the leading AoIP systems, Dante and RAVENNA, on its TouchMonitor TM7 and TM9 models and earlier this year added compatibility with SMPTE ST 2110. “It is the latest standard within audio and video over IP and we expect it to replace SDI solutions over time,” said RTW’s Senior Director of Product Management Mike Kahsnitz, when the announcement was made in April.

Brownsill says that, compared to ST 2022-6 and ST 2110, AoIP technologies are well established, giving the opportunity of “being able to create an audio network rather than relying on ‘point-to-point’ system architectures.” He adds that there are still issues with Dante and RAVENNA being proprietary formats, although the AES67 interoperability standard has made interconnection between them possible. “But until AoIP becomes dominant for transporting audio, AES3 and MADI will continue to have a future,” he adds.

Templeman-Holmes agrees that AoIP now accounts for a significant proportion of AMU sales but points out that “only a very small percentage” of orders do not feature other signal formats. “Analog is in heavy decline but most of our products continue to be ordered with a mix of AES3, MADI or SDI,” he says. “RAVENNA/AES67 and Dante demand continues to grow because of the ability to effectively and cheaply transport large number of audio channels.”

Another aspect of AoIP that is adding a new dimension to audio monitoring is the ability to network and interconnect over distances. This allows for remote working, which has become a necessity during the coronavirus crisis.

“With COVID-19, a great many customers have been forced to adopt different workflows, especially those involved in the live production of sporting events,” says Brownsill. “While remote production is nothing new for many of our customers, we are seeing that many of them have now accelerated their plans to adopt remote production as their new normal going forward.” To enable this, another of TSL’s main monitoring systems, the PAM-IP range, features three different control protocols: NMOS, Ember+ and an in-house designed API.

Nugen has taken a different approach by making all its post-production software compatible with iLok, allowing users to work with the systems on mobile devices or from home studios.

As for the future of audio monitoring in a broadcast world of ever more channels and platforms, the main manufacturers are keeping an eye on new or emerging standards and technologies. Wohler is not seeing any demand yet for ATSC 3.0 as a transmission standard but Templeman-Holmes says it already has products to monitor MPEG-2/4 and Dolby Atmos.

At TSL, Brownsill sees ATSC 3.0 “enabling more consumers to experience object-based audio formats such as Dolby Atmos over the air.” As a result SAM-Q features both Dolby Atmos and AC-4 monitoring capability.

From its humble roots as a moving coil meter, audio monitoring looks certain to carry on evolving and play a major role in ensuring that new broadcast formats work properly.