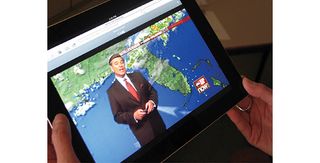 NEW YORK -- Media investment company MagnaGlobal predicts there will be nearly 160 million smartphone users and another 70 million tablets in American homes by the end of 2012. With that in mind, stations are rushing to expand the amount of local news they offer on mobile devices.

But years after the 2007 introduction of the first iPhone that jump-started the mobile video boom, many of those efforts are still in their infancy. It’s been only a year since Scripps became the first group to upgrade its stations so they could live-stream newscasts to cellphones. A separate effort to launch mobile digital TV broadcasts to mobile devices is just now getting off the ground.

EARLY STAGES
“We are still in early stages of developing the business,” said Adam Symson, chief digital officer at The E.W. Scripps Company, “but we have continued to grow pretty significant audiences, and it has become an important part of our quiver. In Denver, we were using it to provide continuous coverage of the Aurora shooting.”

Data on usage is still spotty, but earlier this year, when tornadoes swept through the greater Cincinnati area, about 12,000 unique mobile devices loaded the WCPO-TV mobile live streaming app about 27,000 times. “There were 16,000 loads of the mobile live steam in the 4 p.m. hour alone as the storm was passing through that day,” Symson said.

The group has also been relatively successful in finding sponsors for the live-streaming product, which has been launched at some but not all of their stations. “It’s a fabulous audience by virtue of the fact that smartphone and iPad users are a little wealthier and better educated,” he said.

Other station groups are also looking at doing more live mobile streaming. At the end of July, Cox launched its first iPad app with live-streaming capabilities at its KTVU Fox affiliate in the San Francisco Bay area, said Ray Marcano, director of digital products and mobile integration at the Cox Media Group.

Marcano expects the group to have launched similar iPad apps at about five more stations by the end of September, and will begin work on smartphone apps with live-streaming functionality later in the year.

“It is the really early days but research is showing a lot of interest, and that streaming is the second or third item they go to after opening the app,” he notes.

MOBILE DTV
A more ambitious effort for delivering live newscasts to mobile devices involves the mobile DTV initiative being launched through two station and network consortiums, the Mobile500 Alliance and Mobile Content Venture. Both of these use the over-the-air mobile DTV standard published in October 2009 that offers broadcasters a relatively inexpensive way to transmit content to mobile devices.

A WFTS newscast streamed on an iPad. “It can be implemented in a day and is not that expensive, with the initial package costing about $125,000,” and additional streams running about $10,000 to $15,000 extra, said Jay Adrick, vice president of broadcast technology for Harris Corp., and chairman of the Mobile DTV Forum.

Broadcasters can implement this with few changes to their normal workflows. In the future, the technology will also offer the potential for a number of other features, including non real-time delivery of content, enabling broadcasters to push out news stories, and the development of emergency alerts for severe weather or other dangers.

Adrick and John Lawson, executive director of the Mobile500, also said Mobile Emergency Alert System trials have been conducted, and that the ATSC is working on upgrading the standard for the MEAS.

“MEAS would overcome the problem of cellular systems becoming overwhelmed or going down during emergencies,” Lawson said.

About 100 MCV stations in 35 markets are transmitting Dyle, which offer a simulcast of the station’s programming, but the Samsung phone—priced at $459—is only available in 12 of the 14 MetroPCS markets.

A wider launch of the service will occur sometime before Black Friday, when dongles—electronic connectors for a piece of software—and hardware that will allow existing Apple devices to receive the signals hit the market, Moreno said.

“The fact that we now have a real product in the market with real consumer devices is a big deal,” said Salil Dalvi, senior vice president and general manager of strategic ventures at NBCUniversal Digital Distribution and co-general manager of MCV. “As we get devices into the market, we would expect a lot more stations to light up services. It is a very important opportunity for stations to get their newscasts out to viewers when they are on the go.”

Meanwhile, the Mobile500 Alliance is moving into launch mode. It has ordered some 1,500 receiver dongles for beta tests starting in early October at Fisher’s KOMO station in Seattle and at Hubbard Broadcasting’s KSTP in Minneapolis and St. Paul, Minn.

Dick Rice, the outgoing director of engineering at KSTP, said the station first lit up mobile DTV signals in 2010. It will transmit four channels during the beta test, which will provide both linear streams and DVR functionality. The dongles will be capable of picking up both Mobile500 and MCV signals, but users will need to download a separate app to get the Mobile500 signals.

Brian McHale, vice president of technology at Fisher, said the Alliance is also working with Nielsen and Rentrak for audience information during the trials: “We will gain a great deal of understanding about how consumers are using the device as we move into next year for a wider launch of the application on other stations.”