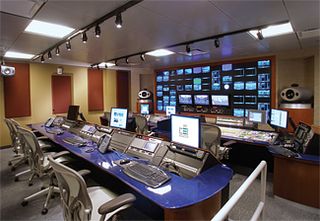 ALEXANDRIA, VA.
Death and rebirth are the only constants in the universe.

As old gives way to new in the television industry, long-cherished knowledge and processes can be suddenly marginalized as archaic. New techniques and workflows emerge that demand new ways of thinking—and new systems to exploit new opportunities.

Thus, while the recent economy has hammered media outlets, the companies that install television systems have made it through the downturn relatively unscathed. In some cases, systems integration companies have found their business growing in an otherwise moribund business environment.

All over the country, broadcasters and media companies are changing from older videotape-based systems to file-based systems for a number of reasons. Perhaps the biggest reason is that file-based systems let companies do more with fewer people, and there is always money to spend on gear if the result is a smaller staff or greater productivity.

One of two HD video production control rooms at the Newseum, built by CEI. As a result, organizations as diverse as local governments to cable broadcasters to satellite video providers have hired systems integrators recently to install complex file-based ingest, play-out and archive systems as part of a move away from older videotape workflows.

"I don't know of anybody [installing videotape recorders] except obviously for those who have it as an archival medium," said Chuck Phelan, managing partner for National TeleConsultants (NTC), a Glendale, Calif.-based systems integrator. "It's certainly not where any of the interesting things are happening."

Data has become such a critical part of television that systems integrators increasingly report that their initial contact with clients is not from the broadcast engineering staff.

"We're seeing greater and greater amounts of involvement by IT groups," said Joey Faust, a senior consultant at NTC.

For example, the IT department of a major media company made the initial contact at NTC for one large ongoing project.

"That's an indication of how far this stuff is converging," Phelan said.

As for business during the past couple of years, NTC has been holding steady.

"We've been fortunate to have a steady stream of customers because of ongoing work for clients like DirecTV and the networks," Phelan said. "But it would be fair to say that most of the media organizations have put many of their capital projects on hold or slowed them down."

NTC has been able to avoid layoffs during the past two years, holding onto its trained and productive employees.

"Our product is our people—we have a strong team of design consultants and those people don't grow on trees," Phelan said. "If you lose those people when times are slow, you know it's going to be cyclical and you'll need them again when business comes back."

"We've had no time during the last year and a half that we haven't had some installation projects going," Phelan said, "so we've kept those folks busy."

At NTC, one reflection of the tighter economy may be pickier customers.

"There may be fewer projects coming up," said Gary Washauer, vice president for NTC. "Those that do come up are very competitively bid."

The bulk of the NTC's work is for media companies, such as broadcasters, networks and cable originators. However, the company does have clients such as NASA and other government agencies.

"The consolidation that we're seeing in the industry means that work will be more difficult to come by in the next couple of years," said Benito Behar, vice president of sales and marketing for TV Magic. "Our industry is poised for some radical changes and stiffer competition in the short- and mid-term."

One of TV Magic's more interesting recent projects was an HD upgrade at TV Azteca-Noreste in Monterrey, Mexico.

"This is the first TV Azteca affiliate in Mexico to produce and broadcast in 1080i," Behar said. "We had to upgrade the facility from a 95-percent analog operation to an analog and SD/HD-SDI facility within four months."

TV Magic had a growth spurt in 2008 with projects at ESPN LA Live and Technicolor's Gower Building, as well as the launch of its Latin America business unit. However, domestic work cooled off the following year, although the company's business in Latin America has been strong.

"In 2009, we saw a lot of station groups, networks and production operations try to take on larger projects by themselves or minimize the system integrator's involvement," Behar said. "This year we've noticed that this trend has diminished some and business has picked up in the second quarter, but I'm skeptical that it will be anywhere near its 2008 levels."

The shift to file-based systems is also the trend seen by TV Magic.

"The interest in tapeless workflows has been there for a couple of years, if not more, and continues to be a high priority for most operations," Behar said.

Newington, Va.-based Communications Engineering Inc. (CEI) is in the Washington, D.C., metro area, which puts the company in a position to work on federal government projects as well as support media companies in the populous east coast region. CEI is wrapping up a large television project for NASCAR in Charlotte, N.C., and has steady work for the federal government and media companies in the Mid-Atlantic region.

"The vast majority of our projects involve [building infrastructure] consulting," he said. "We actually have a whole team of people dedicated to providing infrastructure specifications to architects and builders."

CEI was able to join the beginning of the project at the Newseum, a high-tech multimedia museum celebrating the news industry and freedom of the press. The Newseum, built Pennsylvania Avenue about halfway between the White House and the Capitol in Washington, pulled out all the stops for its technical systems, which includes studios that are used for network news programs. To integrate these systems into a showplace building that also functions as a museum, CEI worked with the architect to make sure all the necessary infrastructure requirements were met.

"The Newseum is an example of a project that was five years in the making," Brody said. "We literally started working with the Newseum and its architects when they didn't even have a concept of what the building was going to look like."

Being in the Washington area has buoyed CEI's system integration work, to the point where the company has not suffered a slowdown in the past couple years.

"I think the majority of systems integrators will tell you that 2009 was a difficult year," Brody said. "Basically, the entire industry stopped spending money and a lot of projects were delayed.

"[However], CEI never had that problem—we were extremely fortunate to have some very solid clients and projects that carried us through 2009," Brody said. "We actually had a record year in 2009 and are on our way to having another record year in 2010."

Executives at each of the companies interviewed for this article made it clear that they enjoy tackling complexity and working to the highest quality standards. Those are necessary traits when working in a multichannel 3G world, where eyeballs are glued to TV screens and alert to every HD glitch.

Not every project needs a systems integrator but the advantages of such companies become more apparent with increasing complexity. Like media companies, systems integrators have had to adapt to maintain their businesses in a down economy, and have found different solutions to do so.