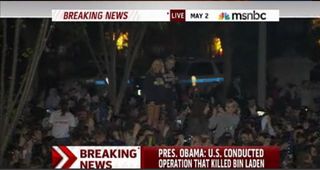 WASHINGTON: The Radio Television Digital News Association gave props to members today on the coverage of Osama bin Laden’s death. While the networks waited for confirmation, the news busted out on social media sites. The RTDNA said it urged “all news organizations to continue with responsible and objective reporting on air, online and via social networking.”

“This story is perhaps the biggest we’ve seen since Sept. 11, 2001,” said RTDNA Chairman Mark Kraham. “Given how sensitive a topic this is for many Americans, the coverage so far has been outstanding. From what I’ve seen, the networks, local news stations in New York and many others around the country have done an excellent job of keeping objectivity, appropriate compassion and keen analysis in their coverage.”

“The cable networks prudently restrained themselves from reporting the news too early and effectively vetted and confirmed the information before breaking the news,” the organization said.

“Given the time and the magnitude of this breaking news, I’m sure many newsrooms were lightly staffed and left scrambling to get people into work,” Kraham said. “Based on the coverage I’ve seen, it’s clear that many people in newsrooms across the country made good decisions with respect to how and when to break this news.”