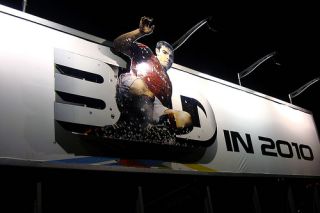 “I felt like I was inside the Durban soccer stadium, where Germany routed Australia, though South Africa is halfway around the world from ESPN’s Bristol, Conn., headquarters, where I watched on an off-the-shelf 46-inch Samsung LED 3D TV,” he wrote.

He’s likely one of a small number of World Cup fans to see the action on a 3DTV. The cheapest new 3DTV set on Amazon is $1,655.98, without shipping. Glasses are another $125 or so, and the 3D option from one of the multichannel programming providers adds around $10. Current 3DTV sets also have to be viewed from just the right angle or they lose some of the 3D effect.

Geoffrey Morrison of Home Entertainment is watching ESPN 3D on a Panasonic VT25 plasma via AT&T’s U-verse service. He described one of the problems of doing live 3DTV production in a vast venue--depth of field.

“The field and immediate sidelines had a convincing sense of depth, very much like you were seated near the camera and viewing the field for real,” Morrison said. “The far side of the stadium, however, was oddly flat and seemingly near vertical. This was highly unnatural looking.”

Aside from that, he said the camera cuts worked well. ESPN appeared to learn from producing previous sporting events in 3D not to cut between close-up and far-away shots. The change can be disorienting to the point of making viewers sick.

“From a pure picture quality standpoint, the image had noticeable artifacts, including one I had never seen before. It seemed in some shots as if there was a watery surface on solid colors. Where in the chain this artifact is being created I’m not sure. I don’t want to say it’s something in the 3D process/equipment just yet,” Morrison said. “There are too many variables in what is pretty bleeding edge technology. Interestingly, while there is half the horizontal resolution, it didn’t seem noticeably softer. Compared to the standard HD image, in the case 3D is a step back. A tradeoff for sure for the novelty of depth.”

Morrison’s complete review is available at Home Entertainment. He rates the service a B-/C+, “about as good as the first HD broadcasts.”