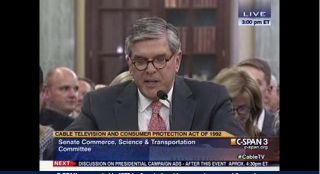 “There’s not likely to be a lot of agreement on this,” the Ranking Republican member from Texas said after Sens. Jim DeMint (R-S.C.) and John Kerry (D-Mass.) came out on opposite sides of the issue.

“I do not believe that local broadcasters need government intervention to be viable,” said DeMint, sponsor of a bill to eliminate must-carry, retransmission consent and exclusivity, which prevents a pay TV provider from picking up out-of-market TV signals. The bill would also eliminate the compulsory copyright requirement that provides the foundation for retransmission, which DeMint called “a construct of lobbyists and politicians.”

“As I listened to Sen. DeMint,” Kerry said, “There’s a real divide here. He would repeal must-carry, statutory copyright license, the buy-through prohibition… and the basic tier requirement. It would essentially make broadcast channels like any other channels; meaning cable operators would be able to buy the programming from anywhere. It would have a profound impact on the concentration of ownership… It would do nothing to resolve this question of negotiating stalemate, and result in very few broadcasters being around.”

Kerry noted that in the recent retrans dispute between Time Warner Cable and Hearst Television, Boston ABC affiliate WCVB-TV was pulled from the cable system. He said the station had been named an Edward R. Murrow Outstanding Award winner.

“We want to see it succeed, but we don’t want to see the pulling of signals used repeatedly in these disputes,” he said, adding that he would not support “radical” elimination of retransmission and must-carry law.

The witnesses at the hearing were similarly divided. Gordon Smith, president and CEO of the National Association of Broadcasters, and Martin Franks of CBS, implored lawmakers to leave the ’92 Cable Act intact. Colleen Abdoulah,chair of the American Cable Association, along with Melinda Witmer of Time Warner Cable, urged the repeal of retransmission consent.

Smith, who was previously a senator from Oregon, told his former colleagues that must-carry, compulsory copyright, and retrans was “a three-legged stool.” Pulling one leg out would “dramatically damage” the ability of small stations to compete, households relying on over-the-air broadcasting to receive service, and smaller businesses to advertise on TV.

Franks, executive vice president for planning, policy, government affairs for CBS Corp., said retransmission “is neither broken nor does it need updated.” He testified that 15,000 retransmission consent negotiations take place every three years, “almost all of them successfully,” and that CBS had completed all of its retrans deals in the last six years without incident.

“Bad weather is more disruptive than market failure,” he said.

Witmer and Abdoulah attacked retrans law on the basis of a la carte pricing. A la carte offerings that would allow subscribers to pick and choose what channels they want versus bundled or tiered pricing. A la carte advocates have been calling for the demise of tiers and bundles for a decade, but pay TV providers have claimed it would be too costly and confusing. At the hearing, Witmer and Abdoulah blamed retransmission consent.

Abdoulah, who is also CEO and board chair for WOW! Internet, Cable and Phone, said, “Consumers often ask why they have to pay for so many networks they don’t want… that’s why they like the Internet….“We don’t have the right to determine bundles. The broadcasters, the programmers, mandate how we have to carry [their signals].

Abdoulah said that as a result of escalating retransmission fees, nearly 800 of ACA’s members—mostly small cable operators—have gone out of business since 2008.

Smith testified that of more than 5,800 cable operators in the United States, only one-third of one percent have had programming disruptions due to retransmission stalemates. He said most involved Time Warner Cable, DirecTV and Dish Network.

“Broadcasters are not the source of rising cable fees,” he said. “Margins are.”

Former Disney lobbyist, Preston Padden, now an adjunct professor of law at the University of Colorado School of Law, said he’d “come to embrace” repealing compulsory programming licenses. He said they allowed cable and satellite operators free access to programming, while Internet distributors were left out.

“The only way to level playing field between Time Warner Cable and Netflix is to repeal compulsory licenses,” he said. ~ Deborah D. McAdams