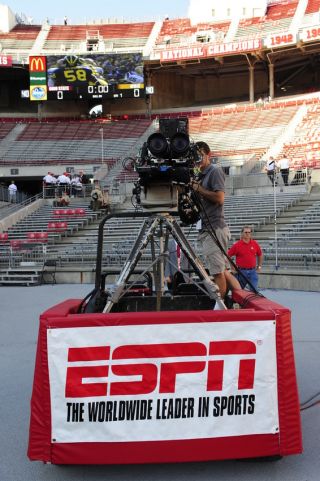 BRISTOL, CONN.: ESPN 3D’s not going anywhere, despite recent reports to the contrary.

“We’re ahead of where we thought we would be, with contracts in place with customers that total 62.5 million ‘available to’ households; way, way ahead of where we were with HD at this stage,” said Bryan Burns, ESPN’s vice president of strategic business planning and development.

A report out of Europe last week said ESPN was considering axing the 3D network. Comments made by the network group’s senior director of technology, Jonathan Pannaman, were interpreted as an end game for ESPN 3D. Pannaman spoke at the Sports Broadcast Europe conference in London.

“We committed to a full year of trial of ESPN 3D and we’re preparing for a second year, but whether this is something we repeat or continue or cut is something that at this point we have very little indication on one way or another,” Pannaman said, according to TVB Europe. He went on to say the sports TV franchise was seeking ways to streamline 3D production, now a separate animal from 2D production.

Burns is on the forefront of the 3D channel launch, just as he was for HD. ESPN was the first major network out of the gate to do both. The 3D network was launched to coincide with the 2010 FIFA World Cup in June. ESPN initially planned to do 85 live sporting events in 3D during the first year, including the X Games, several college football and National Basketball League games.

Burns noted that events continue to be added to the 3D line-up. The Fiesta Bowl, scheduled for Jan. 1, was added yesterday, along with two more regular season college football games.

“Our resolve is not lessened,” he said.
-- Deborah D. McAdams