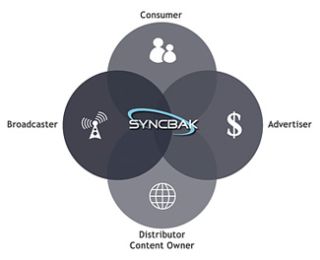 JOHNSTON, IOWA—We recently had a visit from the folks at Syncbak regarding their technology, how it worked and how IPTV might benefit from it. For those of you unfamiliar with them, Syncbak, Inc. is a Marion, Iowa-based media technology company that has created technology to localize the Internet and give broadcasters the ability to reach connected viewers with licensed content.

The basic technology is pretty easy to explain. The station installs a device called the Syncbox, which is inserted into the transport stream, typically on the output of the station multiplexer. The Syncbox inserts a key into the station's data stream.

The other end is a little trickier since it requires that the consumer either have a web-enabled television with the Syncbak application running on it or a standalone component call the "SyncLink." The SyncLink is not a set-top box, but rather a small wall wart-type device that plugs into any outlet in the viewer's home. The function of the application within the web-enabled receiver or the SyncLink device is to verify reception of the key within the station's broadcast signal which essentially confirms that the location is within the coverage area of the station. This information is relayed via the Internet back through the Syncbak network. Once signal reception is verified, a second home-specific key is generated and sent via the Internet to the home and this establishes a one-to-one relationship between the home and the station. If the home happens to be running a local area network, all of the devices on that network are than authorized to receive the local station's content via the Internet.

Syncbak's technology attempts to create a bridge between broadcasters, content owners, device makers and consumers. Rather than try to explain how I understand the technology works, I'd advise talking to the folks at Syncbak for an explanation. I'd rather focus on some of the things I like about the potential applications for the service.

The first thing I like about the concept is that with addition of an application or the SyncLink, every device within a home network is authorized to access local content. I see a couple of benefits here. The first is that pretty much any device attached to the network can access the local content without requiring any add on dongles or specialized receivers.

I am sure there are going to be lawyers looking very closely at this but it sure seems to me to meet the intent of copyright protection since even the streamed content delivered over the Internet is only available within the contour of the station authorized to broadcast it.

Another real nice feature is that through authentication, the station can establish a one-to-one connection with the household. Initially the benefit I see is just in getting more accurate data regarding who is using the service, on what devices and for how long in pretty much real time. Given that we're talking about connected homes, it would also be possible to see how effective our blending of traditional and web-based services are. Given the direct connection to each viewer, it would also be possible to offer targeted services and specialized offers to specific groups or individuals.

The example that I suggested at our meeting with Syncbak was the ability to associate our most loyal contributors with the programming they consume and then offer them very specific benefits. In the case of my home, my wife and I enjoy ballroom dancing and frequently watch programs about that subject. We could receive everything from an e-mail schedule of future programs on ballroom dancing, from real-time alerts to programs on other IPTV services as they are running. In theory, this could even occur when watching other channels or doing other work on my iPad.

I have a whole bunch of other futuristic ideas that came up from the discussions we had so far. We are currently working with one of our programming partners to develop a proof of concept test that we'll begin running in the not too distant future and I'll be reporting on that as it happens.

The real message I want to get out is that as we move forward, we need to be open to explore more diverse and different opportunities for delivering content. Don't get me wrong, it is not that I don't support the concept of ATSC Mobile DTV, I have been actively involved in the process. I just believe that the future for broadcasters means looking beyond the delivery mechanism and into the lifestyle of the end user so that our content is available to them seamlessly.

Bill Hayes is the Director of Engineering for Iowa Public Television.