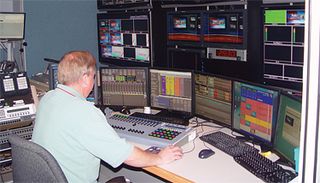 DALLAS—Do more with less is the mantra du jour—and if the hardware packs more punch into a smaller package, so much the better. These aptly classified "integrated production systems" lead the multi-platform television parade.

Grass Valley's MediaFUSE "does for automating Web distribution, mobile and iPad, what Ignite does for production," says product manager Scott Matics. "Successful IPS environments depend on flexible, accurate controls, integration with switching, audio, graphics, camera robotics, and distribution to multiple formats/destinations. We not only do that, but provide adaptive tools for late-breaking events and unscripted shows. And using Konnect, we can 'ignite' existing Kalypso and Kayenne switchers."

Phil Sievers, Team Tricaster Director at the NBA Development League "Idaho Stampede" event. Ignite has proven "very flexible for both news and unstructured live programming," says Walt Nichol, chief engineer for CBS affiliate KMOV in St. Louis. "A director and TD/Ignite operator handle everything for our daily talk/variety hour and weekly financial show." Because production decisions are pushed upstream during script markup, rather than on-air in realtime, "any form of technical automation takes more discipline from everyone involved... Ignite can do virtually anything a director and TD could have done manually, and do it repeatedly—the key is initial programming. We acquired Ignite to reduce operating costs and it's met that objective without impacting our on-air look."

NBA's Development League is in their third TriCaster season, producing games for on-air and Web. "When the broadcast ends, operators switch from live to full-featured editor mode to create highlights for broadband and broadcast," says Steve Hellmuth, executive vice president of operations and technology. "It's key to distribute highlights immediately after live events... next year we'll do the same for the WNBA. We also use it for arena displays at NBA International events. TriCaster's a manageable tool that lets us funnel creative energy into our product; it makes HD affordable by doing with one or two people what previously took six in a mobile unit."

Dallas City employees David Zepeda (R) and Tommy Renya prepare to record the 2010 Veterans Day Parade on a Rushworks REMO in front of the Dallas City Hall.PUSHING THE ENVELOPE

The scalable IT client/server architecture in Ross Video's OverDrive lets facilities tailor workflow to suit their needs, according to Brad Rochon, marketing manager for the Iroquois, Ont.-based company. With more than 100 device interfaces, "customers can use legacy gear or adopt new technologies... our GlobalView GUI lets operators customize their status environment, while 'Look-Ahead' allows them to traverse rundowns at any speed as OverDrive automatically manages device loading, cueing and playout."

WRC, the NBC O&O in Washington, D.C. launched Overdrive with a new HD studio last April. "The learning curve was tough, but we have a good staff and they quickly adapted and took ownership," says Bill Nardi, director of technology & broadcast engineering. "We tried keeping things simple at first, but were soon pushing the envelope to be as creative as possible. There was an initial concern our look and content would seem canned, but that wasn't the case. OverDrive is very flexible and we were quickly able to deviate from the rundown."

While other companies focus on the switcher and graphics components, Rush Beesley, president or Rushworks in Flower Mound, Texas touts the company's REMO as a turnkey solution. "It includes not only pan-tilt-zoom camera controls," Beesley said, "but also video switcher, audio mixer, downstream keyer, file browser, playlist builder, multi-format file encoding, and streaming, all in a ruggedized, portable case." New REMO-HD—redesigned to maximize productivity and monitoring—includes a 22-inch display for its 10 input multiviewer and a touchscreen for the GUI.

REMO replaced a four-camera City of Dallas truck three years ago. "Operation took seven people and was just a nightmare, said telecommunications manager Bennie Wilcox. "With REMO, I've cut my crew down to two. We use it primarily for remotes; everything's built-in and I can plug into a phone line to stream 'live' onto the City's website. That saves us a ton of money and the quality is really outstanding."