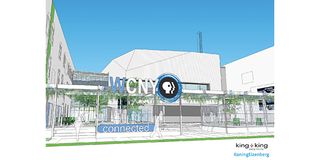 Initially, the JMCF will support 35 streams, which is one primary HDTV and two or three secondary DTV channels per station. Since this facility is sized to support up to 200 DTV channels, it provides the opportunity for other U.S. PBS stations to participate.

“Centralcast LLC was formed to realize true recurring savings through operational efficiencies, eliminate redundant equipment, and reduce maintenance contracts exceeding $25 million over the next 10 years,” Daino said. “We want to create a business model that provides for new revenue streams through a fee for service model, as well as a self-sustaining approach for master control operations and infrastructure support.”

CentralCast LLC’s Joint Master Control Facility (JMCF) is located within WCNY-TV/FM’s new Broadcast and Education Center in Syracuse, N.Y. The facility is expected to open in October. One of the most interesting aspects of Centralcast’s model is “monitoring by exception,” an efficient, automated workflow that reduces this highly complex centralized broadcasting process to just three screens. In other words, no big multiviewer monitor wall typical of today’s technical operations centers.

“Rather than expecting an operator to watch 35 or more simultaneous streams looking for problems, our workflow takes care of its own QC monitoring. Monitoring of both signal quality and workflow is automated and integrated into the fabric of the facility,” said Tim Murphy, director of file-based solutions for Evertz, in Burlington, Ontario. “When a problem arises, the system automatically detects it—such as a channel with no audio—and puts that ‘touch point’ into a ‘penalty box’ on the operator’s MAGNUM touch screen.

Monitoring by exception is an intelligent, data-driven process that only notifies the operator on duty when a problem develops, according to Murphy.

“All’s well until a problem appears in the penalty box on one side of the MAGNUM touchscreen,” he said. “When the operator touches the display, more details appear including graphic depictions pinpointing the problem and suggested actions to fix it.”

In some cases the problem may have already been resolved by the system. For example, if a scheduled program were not available on the proper server, automated messaging would be sent up the chain to locate and retrieve the missing asset and move it to where it needs to be. With monitoring by exception, master control can now be run by fewer, less highly skilled operators, reducing labor costs.

AUTOMATED TRAFFIC MANAGEMENT
According to Murphy, great pains have been taken to avoid problems altogether. Evertz master control and automation systems under the control of the Mediator platform were configured to cooperate seamlessly with Myers ProTrack traffic and scheduling software, in order to facilitate the end-to-end workflows as much as possible.

“ProTrack takes a comprehensive, holistic approach to traffic and scheduling, which results in significant operational efficiencies and savings,” said Crist Myers, president and chief executive officer of Myers Information Systems, based in Northampton, Mass. “Among its many traffic functions, ProTrack defines the schedules and ensures that programs and other content slated for broadcast are acquired in time for delivery to air. It also plays an instrumental role in managing the media library to ensure that content is purged appropriately to make the most of the valuable but limited storage.”

Evertz VistalLINK Pro SNMP Monitoring and Control Software ProTrack is the traffic system used by virtually all U.S. PBS member stations, according to Crist, who adds that public broadcasters represent a respectable portion of its overall business. Prior to joining CentralCast, eight of the nine PBS stations utilized ProTrack to manage their broadcast operations. The remaining station switched over to ProTrack so all nine would be singing from the same song sheet. This made it easier for Myers and Evertz to implement the unified automated workflow.

“ProTrack was initially designed to meet the unique requirements of public broadcasting,” Crist said. “If the nine CentralCast stations were using nine different traffic systems, it would have been virtually impossible to unify them onto a single, streamlined workflow in a timely or costeffective manner.”

RESILIENT ARCHITECTURE
The stations will go online in a staggered fashion beginning with WCNY on Oct. 31. When ready, each station will flip the switch that moves the master control from their local facilities, now known as “spokes,” to the JMCF, now the “hub.”

“Signals will move between the hub and spokes over a high-performance IP video network,” said Marc Bressack, executive vice president of Azzurro Systems Integration, in Northvale, N.J. “Programs, content, and interstitial programming for the HD and SD channels [like the Create network] will move from each spoke to the hub where it will be ingested, QC’d, prepped, monitored, and ATSC encoded, among other tasks.”

According to Paul Berg, director of technology and chief solutions architect, at Azzurro, “The signals will then be sent back to the spokes as an ATSC-encoded multiplex that’s ready to go to their transmitters. In the case of live shows, the multiplex will be turned right around with virtually no delay. There’s also a sophisticated disaster recovery plan for both the hub and each of the spokes to ensure that the stations stay up and running if the infrastructure is ever compromised by natural or manmade disasters.”

In a signal path parallel to the ATSC multiplex, the hub will also send each spoke a replica of its programming and schedule for the next day, which is then locally cached on Evertz OvertureRTLive server and separately managed by Mediator SC (self-contained) software. In the event of an accident or technical failure, like damage to underground fiber network cables or a flood, each station could take the reins and continue to broadcast from its local cache until the problem is resolved.

Murphy explained that the hub was designed with N+3 levels of redundancy, including automatic failovers to backup resources, such as the next available ATSC encoder in the workflow and local caching of programming. “You don’t need the hub to run the spokes,” Murphy said. “That’s the beauty of this.”