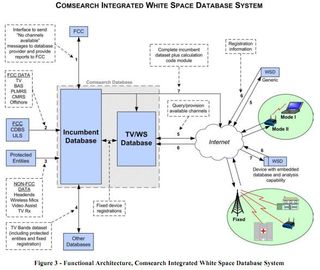 Nine companies have submitted proposals to the FCC to manage white space databases for TVBDs. The devices will have to reference the databases to locate open and occupied spectrum.

Mountain View, Calif.-based Google is the largest of the nine to submit a proposal. It was one of the main proponents behind opening TV airwaves up to unlicensed devices.

Comsearch of Ashburn, Va., already works with several federal agencies on developing rules and standards for the use of radio frequency spectrum. The company currently manages a spectrum database in the 70-90 GHz band as well as one tracking wireless medical telemetry services. It submitted a 55-page proposal to the FCC.

Neustar of Sterling, Va., threw in to be a database manager. The company’s proposal notes that it currently manages the database for cell-phone number portability. In addition to databases serving wireless carriers, Neustar administers the .us and .biz domain registries.

Another Virginia tech corridor company, Key Bridge Global LLC of McLean, said it is only applicant to bring in technology from other companies. Key Bridge’s proposal listed Sun and Oracle hardware, Amazon’s cloud computing resources, Level 3’s infrastructure as well as contributions from Java, Linux, Google and Paypal, among others.

Frequency Finder of Toccoa, Ga., and RadioSoft of Edgewater, Fla., jointly applied to be database managers. Their proposal says RadioSoft has been processing FCC databases since 1981, and has “supplied third-party FCC data queries online since 1987.”

WSdB LLC was formed just to manage a white space database. Neither its filings nor its home page indicate location headquarters, though its initial investor is based in Dallas. It proposes to create an application programming interface to enable real-time synchronization with other databases.