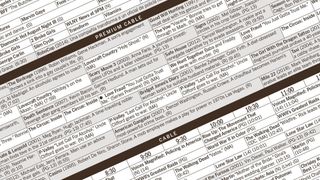 NEW YORK—The impact of streaming has extended its reach to the pages of the New York Times, as the paper has announced that its eight-decade tradition of printing the daily TV listings took its final bow over the weekend.

What had been a familiar resource for Times readers for 81 years had essentially become irrelevant because of the new options and changing viewing habits of consumers, according to the Times’ Culture Editor Gilbert Cruz.

“We are firmly in the streaming age, and the TV grid no longer reflects the way people consume television,” Cruz said.

“It’d used to be you’d flip through the TV guide and say, ‘Oh my God, this movie is on basic cable this week,” he added. “But now that buzzy show is on Netflix whenever you want to watch it.”

The daily TV listings were only appearing in the paper’s New York City edition, not the national one. This change will allow for there to be just a single version of the Arts section, which will help the paper to be delivered on time, according to the Times.

The Times highlighted multiple options that it is still providing to help provide a guide through the sea of content, including a roundup of streaming options in the paper’s Sunday at Home section; a “Watching” newsletter that comes out four times a week and offers a curated guide; and online recaps and previews of upcoming content for streaming services.

The New York Times first provided TV listings on May 18, 1939, as part of its Today on the Radio column.