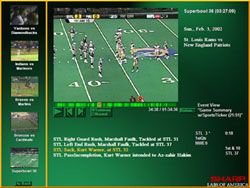 What if there were an automatic way to take out the moments that make up a dull day of TV sports viewing? How would that impact game coverage, viewers and even coaches?

The HiMPACT software relies on sophisticated algorithms to identify critical game action and extract it from the mundane to build game highlights automatically.

That’s exactly what Sharp Labs of America in Camas, WA, is hoping to find out. The company has developed a new technology designed to remove all of the cleat smacking, chew spitting, and helmet adjusting on TV baseball, as well as similar extraneous activities from other sports such as football, soccer and sumo wrestling.

Running on a standard PC-equipped with a video input and output, the HiMPACT software relies on sophisticated algorithms to identify critical game action and extract it from the mundane to build game highlights automatically. For example, using HiMPACT, Sharp was able to create an 8:09 minute summary of a 52-minute segment from Game 5 of the 2001 World Series between the New York Yankees and the Arizona Diamondbacks.

The HiMPACT algorithms rely on two key factors: editing patterns and color changes. “The editing patterns we use are really universal,” explained Ibrahim Sezan, director of Information System Technologies at Sharp Labs. “Our technology uses patterns that are common from one broadcaster to another. In fact, our software was designed to run in Japan for Japanese baseball as well as here for Major League Baseball.”

“Color is also an important cue for us. The field is green and the football field has lines, that sort of thing.

“And even though color changes from field to field and within the same game because of the time of day, the algorithm has margins built in (to accommodate those variations).”

Development of the technology began as an effort to make sports viewing more enjoyable for average television viewers and blossomed into applications for sports production companies and coaches, said.

According to Sezan, Sharp worked with sports broadcasters and producers to refine its approach in identifying which content should be kept and discarded.

As the technology was refined, new capabilities, such as synchronizing scoring data from systems such as SportsTicker with the game action retained by HiMPACT, were added. The end product thus was a game summary with rich metadata that could be used by an asset management system in a digital studio environment.

A spin off of the technology specifically designed for NFL coaches, called HiMPACT Coach, is being offered as a product. Sharp Technologies Ventures is pursuing partners to bring consumer and sports production versions of the technology to market, said company president Jon Clemens. However, Sharp has discussed licensing HiMPACT to several large sports broadcasters, he said.

Back to the top