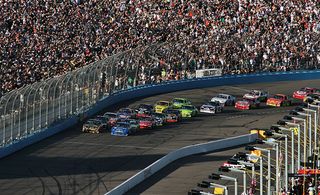 CHARLOTTE, N.C.: NASCAR becomes the latest sporting enterprise to produce an event in 3D. Turner Sports will become the first network to offer a NASCAR race live in 3D on July 3, the racing association said. The Coke Zero 400 from the Daytona International Speedway will be telecast in 3D live on DirecTV and on NASCAR.com.

“Our fans have been asking us about 3D for several months so we’re excited to deliver that to them for the first time ever in what will likely change how NASCAR is consumed moving forward,” said Jay Abraham, chief operating officer of NASCAR Media Group.

The 3D production “will feature two custom racing feeds produced specifically for 3D,” NASCAR said. “The first will provide a unique look at the racing action from strategically placed cameras around the track designed to maximize the effect of 3D. The second stream will bring the mayhem of pit row into the third dimension creating a one-of-a-kind visual experience.”

Coverage of the race will also be presented on TNT in its “Wide Open” letterbox format, with race action at the top of the screen, graphics at the bottom and most commercials run in a corner.

NASCAR created the RaceBuddy3D Web site explaining system requirements for watching the event in 3D on a computer. Computer graphics card specialist Nvidia says the race will be the first event to use the Microsoft Silverlight player with Nvidia 3D capability.

Live sports has been the launching pad for 3DTV, just as it was for HDTV. Cablevision aired the first live non-anaglyph 3DTV event in the United States--a hockey match--in March. (Previous 3D sporting events were done, but distributed to only a select group of theaters.) Since then, the Masters golf tournament and most prominently, the FIFA World Cup, have been telecast in 3D.