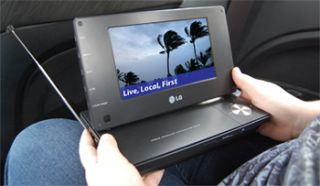 The LG_DP570MH Mobile DTV player also plays DVDs and will be available later this year.
LAS VEGAS
Armed with a new industry standard in hand—quite literally, in the case of future devices—and laying claim to some of the best real estate available at the NAB Show this month, ATSC Mobile DTV proponents are counting on all the stars aligning in Las Vegas for the launch of what some see as a "game-changer" for the broadcast industry.

Situated in the heart of the Grand Lobby of the LVCC at NAB (April 12-15), the Mobile DTV Marketplace will demo a wide array of consumer devices rolling out in the near future. The marketplace is being sponsored by a quartet of heavy hitters: the Advanced Television Systems Committee, the Consumer Electronics Association, the Open Mobile Video Coalition, and NAB.

Themed "Experience the Power of Local Broadcast TV on the Go," the marketplace is being geared to provide local broadcasters with the wide array of likely mobile devices to be shipped soon to American retailers—from smart-phones to hand-held iPad-like PCs to fixed in-vehicle displays.

Mobile DTV proponents also will conduct a NAB Super Session on Tuesday (April 13) to brief executives on an upcoming "consumer showcase" for the Washington, D.C. market (DMA 9) now getting underway with the participation of at least eight local broadcasters. The session, "Mobile TV: Ready for Primetime?" will feature Saul Berman of IBM, Brett Jenkins of Ion Television, Frank Barbieri of Transpera, Jonathan Barzilay of Flo TV, and Gary Arlen of Arlen Communica-tions.

"While everyone talks about 'mobile,' this is more about 'transportable,'" said panelist Arlen, an analyst based in Bethesda, Md. "Viewers will watch shows or streams wherever they are—thus validating the concept of 'best available screen.' That is, they'll use a handheld or mobile device if they cannot get to a laptop/desktop monitor or a 'real' TV set."

Arlen thinks the major challenge for mobile video will be the competitive landscape. "Consumers will be very confused about the different offers—and the incompatible equipment requirements—as they're pitched Flo TV, the various OMVC options, as well as streamed Web video services they can get now on smart-phones and other mobile handsets."

iMovee’s Touch Telly is one of the first products on the market to be ATSC-M/H compatible and is currently on sale in selected U.S. cities. OMVC Executive Director Anne Schelle said Mobile DTV shouldn't be mistaken by consumers as simply another option in the current competition already out there. "[Pay-service] MobiTV is only on the Sprint platform and offers largely recorded clips—not simulcasts of live TV," she said. "And Flo TV is a total premium service and is not offering local stations. At NAB, you'll see us demo all the local Las Vegas broadcast channels, plus some premium cable content, across [several] broadcast stations."

NAB Science & Technology Senior Vice President Lynn Claudy said while Mobile DTV will have a big presence at NAB, "The focus is moving well beyond tech-nology demonstrations. The NAB Show's demos and sessions will underscore the real breadth of participation by industry partners and CE manufacturers—including the CEA—which will be critical in determining if Mobile DTV will succeed in the marketplace." However, Claudy said, the technology side of mobile DTV is now largely stable. "Our optimism in the technology realm has paid off well."

Claudy said—based on what promises to be a robust level of participation in the Mobile DTV Marketplace (and in the Mobile DTV Pavilion located in the upper level of the LVCC South Hall)—"NAB is optimistic about Mobile DTV's commercial future." NAB's chief technology executive also said engineers should take note of the several Mobile DTV sessions and papers being offered at the Broadcast Engineering Conference. One paper, "Perceived Video Quality and Bit Rate in the ATSC Mobile DTV Standard," will be presented by the Communications Research Center of Canada on Sunday (April 11) at 5 p.m. (Rm. S219, LVCC).

Andy Whiteside, general manager of Acrodyne Services, said for local stations the implementation of Mobile DTV is not just a transmitter or studio upgrade. "It requires an integrated approach to the 'signal chain' in order to provide the broadcaster and potential viewer with full access to the capabilities of the new standard," he said. (Acrodyne, which last year shuttered its transmitter business, increasingly sees itself as a Mobile DTV systems integrator and does not en-dorse any particular product lines.)

Whiteside said the new ATSC A/153 standard offers broadcasters myriad opportunities beyond what he calls "little TV," but he said several business and legal issues remain—notably content rights and questions of free-to-air or subscription—which must be resolved. "The resolution of such issues drives the tech-nical side, so my advice to tech execs is to retain as much flexibility as possible in selecting equipment and suppliers, so as not to get backed into a corner. Mobile DTV represents the only opportunity for broadcasters to extend their reach to new demographics, to extend their reach outside the home," he said.

Arlen said revenue questions remain, as well—"namely who gets a share of what? I'm also waiting to see how the mobile device dealers—ranging from big-box merchants to wireless phone carrier outlets—will sell their video services. That will add another level of entertainment and a lot of complexity to what is already a complicated sales process," he said.

Sterling Davis, vice president of engineering at Cox Broadcasting, chairs the OMVC's Technical Advisory Group. "We already have five [Cox] stations up and running with mobile TV and there are a lot of good reasons to do it," he said. "At this stage, I don't think the jury's still out on mobile TV—I think it's going to happen. Most broadcasters will wind up doing it sooner or later. And it's not very expensive to implement," said Davis, the recipient of last year's NAB Engineer-ing Achievement Award for Television.