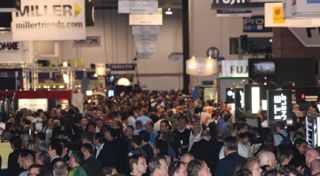 LAS VEGAS: Starting from very simple roots in 1923, when a handful of broadcast engineers gathered annually to talk technology, the NAB has grown into a behemoth of a show. And yet, through all the years and iterations, one thing remained the same: The NAB moniker alone made it clear exactly to whom the convention was targeted.

And as we have for the last several years, we find ourselves in the midst of a long-coming shift. Yes, this is a show for broadcasters, but has that entire definition now changed? Who exactly do we define as a "broadcaster" now?

Years ago, when the show opened its doors to collaborators/competitors from the satellite and cable worlds, it did so slowly. This go- round, the convention has more roundly and openly embraced the influx from all digital media and entertainment professionals.

The result is a convention that sits on the cusp of transformation—evolving from a single-industry caucus to one that is now attempting to embrace all forms of distributed media.

This leads we nomads—an estimated 90,000 of us will head to the desert for the NAB Show from April 14-19—to a time when, perhaps more than any year previous, the 2012 convention is being talked about as a transformative year.

To cement the convention's shift to a broader market, this year's convention is courting new players with an intense new focus on filmmaking, military and government applications, technology-savvy houses of worship, online content purveyors and professionals from the world of post production.

"It is still about broadcast if you will, just a new definition, driven by the need to deliver content in a multiplatform environment when and where the consumer wants it," said Chris Brown, executive vice president of Conventions and Business Operations for NAB. "It's important to note that in doing that we are no less a broadcast event; we have continued to honor our broadcast core, while looking to reflect the new realities and demands of the media marketplace."

Show organizers plan to achieve this multifaceted demand by courting participants that have in the past been less-than-friendly competitors. "In some cases, [we] will draw together sectors that have in the past considered themselves distinct competitors," Brown said. "It is important that the show provide unique perspective and to some extent, challenge traditional views."

Dennis Wharton, NAB Executive Vice President of Communications And yet not push away their core constituency, the NAB is aware. "The goal is definitely not to try and be all things to all people," he said. "If we shoot too wide we run the risk of confusing our audience and losing relevance."

Surf the NAB Show website for examples. The newly named Technology Cinema Summit will tutor how changes to movie theatre technologies might impact the broader media marketplace. An entire series of sessions known as the Creative Master Series will touch on the ways motion picture, TV, advertising and online communities are crafting content, and how to move media more efficiently through those different mediums. And peppered through the show are sessions that are re-imagining the broadcast process—like the Disruptive Media Conference—which looks at the new digital and interactive divisions popping up within companies to focus on online video and mobile entertainment.

While the convention has opened arms for a growing number of new players, the organization reiterates that it is not detracted from supporting its core broadcast constituency. A rallying cry to that effect surrounds one of the biggest issues to impact broadcasting—the auctioning of broadcast auction spectrum by the FCC. Last month, President Obama signed the Congressional Budget Bill that—among other things—gives the FCC the authority to hold incentive auctions for broadcast spectrum. The key development in the deal: spectrum is only to be auctioned by broadcasters who voluntarily offer up spectrum to be sold, a welcome stipulation for broadcasters reluctant to relinquish their spectrum.

Throughout the long years of debate over this issue—which the FCC and wireless companies hailed as an answer to raising millions and helping solve wireless public safety issues—the broadcast industry has reiterated its continued disinterest in relinquishing its spectrum. The resulting ruling has been welcomed by the NAB, particularly because the auction is a voluntary one, even though the government can still use its authority to move broadcast stations to new channels to create larger blocks of frequency to sell. There's also a catch for low-powered TV stations, who aren't part of the spectrum auction legislation and aren't guaranteed to have a new home if the FCC reallocates them.

Nonetheless, this will be the first convention since the ruling, marking the end of a long-running battle.

"[The victory came from the fact that] our arguments were compelling; it's not always about who has the biggest war chest, though we were aligned against CEA, Google, the cellular telephone industry," said Dennis Wharton, executive vice president of Communications for NAB. "The power of an idea still matters, and our education efforts really won the day."

Vincent Sadusky, President, OMVC The other side of the aisle feels differently, of course, saying the brokered deal gives the government the ability to auction off spectrum currently held by broadcasters, alleviating what wireless carriers call a woeful spectrum crunch. "We are pleased that the legislation will not only free up more spectrum, but will finally provide public safety with the spectrum it needs to do its vital work," said Jim Cicconi, a senior executive with AT&T.

The next steps will be years in coming, with a FCC rulemaking decisions determining exactly how the incentive option will play out. "We'll be involved in the rulemaking process so that stations who decide to go out of business are adequately compensated, as well as [work] with the repacking of the TV band to make sure that those stations that stay in business don't have their business model damaged," Wharton said.

USE IT OR LOSE IT

In the interim, the NAB is encouraging broadcasters to consider taking smart, cemented steps to build out their spectrum—whether it be with mobile, multicasting or full HD. "If a broadcaster plans to keep its spectrum, they need to use their spectrum as intensively as they are able at this time," said Peter Tannenwald, a member of Fletcher, Heald & Hildreth, a media technology law firm in Arlington, Va. "The more use they're making of their 19.4 megabits, the less likely the FCC will be to pressure them to sell. You don't want to be sitting there with one standard definition television stream. You're a big sitting duck."

One of the more promising options remains Mobile DTV. NAB continues to tout the potential of mobile video services, despite the relatively slow maturation of consumer devices and the measured rollout of Mobile DTV signals nationwide. The show will address the potential of the technology with sessions like "Mobile Video and Mobile TV–Beyond YouTube" and the Mobile DTV Marketplace, where Mobile-DTV-capable portable DVD players and cellphones will be on display.

Several Mobile DV groups continue their public education efforts, including the Mobile Content Venture, Mobile500 Alliance and the Open Mobile Video Coalition (OMVC). Numbers continue to swirl about the growing number of markets that have the capability to deliver programming to phones and other devices— more than 120 stations are on the air with mobile signals, reaching viewers in more than 46 markets, according to OMVC. "The huge increase in the number of broadcasters delivering Mobile DTV underscores the momentum behind this exciting new service," said Vincent Sadusky, president of OMVC and CEO of LIN Media, a member of the coalition.

To further highlight the broadened scope the NAB is taking this year, the organization has tapped this year's theme as "The Great Content Shift," a move that will be reflected in the exhibits, conference programming, speakers and dialogue throughout the show. The concept of multiplatform content distribution has been driving much of the discussion over the last few years, and this year will be no different, Brown said. "This means that those in the business of creating, managing and distributing content must look less at specific channels of distribution and more at every possible platform opportunity," he said. "It is becoming clearer and clearer that opportunities exist to create content that can live across many platforms, and can be monetized across all those platforms," he said.

There's a method to the madness of the sprawling exhibit floors, too. As it has for several years, the exhibit floor is organized around the stages of content creation and delivery rather than specific industry sectors. "The premise is that the tools, services and technologies that are required apply whether you are in broadcast television, film, cable, satellite, Internet, mobile, whatever," Brown said.

Sessions and conferences should reflect that as well, as this year's show gives an even brighter spotlight to non-broadcast platforms, with programs geared to online video, mobile—and yes, even cable. One of the best examples of this new focus is the new Disruptive Media Conference, a targeted conference with a spotlight on the unique requirements of distributing content in the online, mobile or branded world.

"The goal is to take advantage of the unique environment the show represents to add a content commerce element," Brown said. "Obviously our strength is on the technology side, but we draw the major content players, and over the last few years we have also been drawing the major digital media players. "

At this year's NAB., the goal should be to look 360 degrees at these new pathways—but to keep your eye on the main thing. "People have to think about looking at their business as a content business and delivery business, and look at the way that they can profit from each one," said Tannenwald. "Then go and try and forecast what the delivery methods will be—cable, mobile, Internet streaming—whatever is coming along. Make sure that they get the best benefit out of their content."