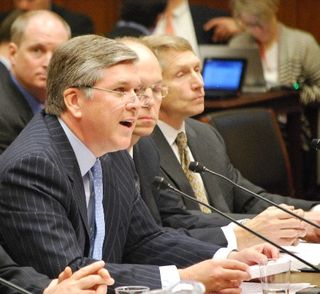 WASHINGTON: Broadcasters who don’t voluntarily hand over spectrum for the administration’s broadband shouldn’t be charged new fees. Gordon Smith, head of the National Association of Broadcasters, made the point in a letter to an Obama Administration official this week.

“Stations that choose not to participate in a voluntary incentive auction must not be subjected to onerous new spectrum taxes that would make it increasingly difficult for stations to finance local programming, operations and newsgathering efforts,” Smith said in a letter to Lawrence Summers, director of the National Economic Council.

Summers was the administration’s point man in late June when President Obama issued a memo directing the FCC to secure 500 MHz of spectrum for its Omnibus Broadband Initiative. The goal of the initiative is to create a nationwide, wireless broadband network. It includes a proposal to reallocate 120 MHz of broadcast TV spectrum for broadband, and a mechanism for imposing new license fees.

Smith, pictured above on Capitol Hill earlier this year, implored Summers to consider a “holistic approach” to spectrum policy that does not jeopardize broadcasting.

“We have no quarrel with incentive auctions that are truly voluntary,” he said. “We are concerned, however, that an arbitrary goal of reallocating 120 MHz of the spectrum currently designated for broadcast television--more than 40 percent of the current allotment--would create a number of serious engineering and practical difficulties.”

Smith goes on to say that the presupposed 120 MHz reallocation was found unfeasible by a recent gathering of top broadcast engineers. They considered channel-sharing, advanced compression, cellurization of the broadcast architecture and improvements in VHF reception. No approach was found provide efficiencies adequate to yield 120 MHz without harming TV reception.

Smith noted that the broadcast television industry just spent more than $10 billion to complete the government-mandated transition to digital broadcasting.

“During the process, stations returned 108 MHz of spectrum to the government--spectrum that has already been auctioned to wireless service providers and allocated to public safety, but which has yet to be deployed,” he said.

Smith ask that spectrum policy adhere to four principles: continued access to digital multicasts, and to mobile DTV in the future; undiminished signal strength; protected allocations for broadcasters who don’t turn over spectrum; and no new spectrum taxes.

“We stand ready to work constructively through a fact-based process that remains truly voluntary and founded upon the engineering realities of sound spectrum management,” he said.

The Obama Administration gave the FCC 10 years to free up the 500 MHz. The commission’s own timeline comprises 64 proceedings, new and established. A TV spectrum reallocation Notice of Proposed Rulemaking is tentatively scheduled to be issued in the third quarter of this year for a resulting Order to be completed next year. Auctions are to be scheduled for 2012-13, with the spectrum hand-over in 2015.

One point Smith did not touch on was a spectrum inventory. Bills have been circulating in Congress calling for one, and another was introduced yesterday. The Spectrum Measurement and Policy Reform Act is the most detailed bill yet, and the first to authorize the FCC to share revenues with broadcasters who voluntarily relinquish spectrum for auction.
-- Deborah D. McAdams

June 28, 2010:“Obama Memo Orders Agencies to Free 500 MHz for Broadband”
It directs the NTIA to work with the FCC to complete a “specific plan and timetable” by Oct. 1, 2010, for freeing up the spectrum.

June 28, 2010: “Summers Emphasized Voluntary Return of Broadcast Sopectrum”
The government does not intend to force broadcasters to turn over spectrum for the National Broadband Plan, a White House official said this morning.