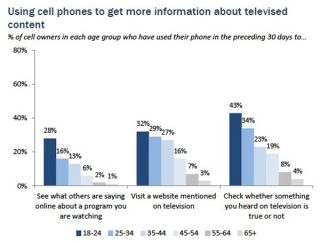 Half of adult cell phone owners say they use their phones to supplement their TV viewing experience, according to new findings from the Pew Research Center's Internet & American Life Project.

The study, released July 17, found that 52 percent of all adult cell owners are "connected viewers," that is viewers who used their phones for activities like Web searches, engage with the shows they are watching or interact with other watching the same show in the 30 days preceding the April 2012 survey.

The researchers sought further information from the 57 percent of respondents who said they use their cell phone to download apps, use the Internet or check e-mail on their phones. Of this group, 35 percent visited a website mentioned on TV, 20 percent used their phones to find out what others were saying about the show being watched and 19 percent posted their own thoughts about the program. Of all cell phone users, these percentages work out to be 20 percent, 11 percent and 11 percent, respectively.