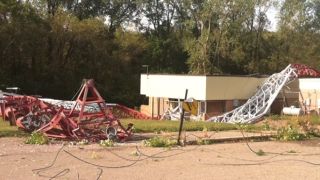 KSMQ-TV, the public television station in Austin, MN, returned to air Sept. 5 less than a day after a wind storm toppled a portion of a 440ft tower holding the station’s studio-to-transmitter link.

The section collapsed within the footprint of the tower, falling on top of a station building that once housed KSMQ-TV’s analog transmitter and leaving twisted metal and cables draped across the structure. No one was injured in the collapse, which occurred between midnight and 1 a.m.

The collapse took down KSMQ-TV’s STL to its DTV transmitter site in Grand Meadow, MN, taking the station off air. It also disrupted the newsroom of KTTC-TV, the Quincy Newspaper-owned station licensed to Rochester, MN, by taking down a microwave link used to connect its Austin bureau with its Rochester newsroom.

The station’s prompt return to air is a credit to those in the local broadcast community, said station president and CEO Eric Olson, in media reports. Working together with a fellow engineer at KTTC-TV, KSMQ-TV chief engineer Timothy Gassmann devised a solution to get the station back on air.

To reestablish the microwave link with its Grand Meadow transmitter, Gassmann attached a microwave unit from the transmitter building to one leg of a decommissioned 200ft tower outside the station’s master control room. While not having been used for years before being called into service following the collapse, the 200ft tower proved to be just what was needed to hold the STL on the Austin side of the link.

“I credit procrastination and not having money in the budget to remove the decommissioned tower,” said Gassmann.

While insurance will cover most of the damage, the station’s portion of the work is estimated to be about $10,000, according to the reports.

KSMQ-TV has set up a fund at a local band for contributions to help it defray the cost of work and is also taking contributions on its website.

Plans are in the works to replace the collapsed tower, which went into service in 1981. Currently, KSMQ-TV is getting estimates for a new tower from a couple of companies as well as getting bids to clear out the debris.

If everything goes as planned, the station will put its new tower into service in early spring 2013.

“With the winters in Minnesota, it’s difficult to tell,” said Gassman. “We may be limited by the weather and have to wait till the frost is gone.”