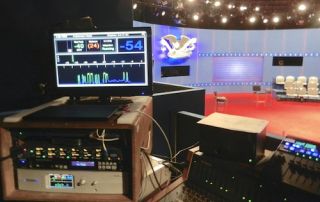 LANCASTER, PENN. –Production audio mixer and owner of All Ears, Inc. Michael Abbott mixed the audio feed for broadcasts of the 2012 Presidential debates, and he selected the Linear Acoustic LQ-1000 Loudness Quality Monitor to measure audio loudness levels and analyze the mix.

“I used the LQ-1000 on the broadcast feed to the pool feed provided by ABC and CNN and FOX, which was derived from a discrete mix on the front-of-house console,” Abbott said. That feed was then used by broadcast television networks, including ABC, CBS, NBC, FOX, C-SPAN, CNN, Fox News and MSNBC.

“In addition to station compliance measurement and logging, the LQ-1000 is equally at home helping to create compelling audio for high-profile live broadcasts,” said Tim Carroll, president and founder of Linear Acoustic.

“I have used most, if not all, of the loudness meter devices available and find the LQ-1000 offers the most functions to analyze the mix. The three bar graph meters (each showing different integration times) and the histogram are most helpful, so is the ability to save a session via the USB port.”