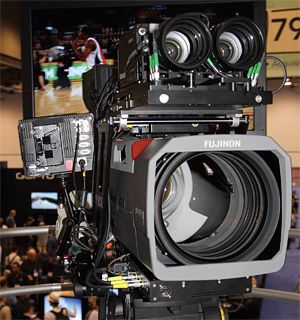 SEATTLE
The jury may still be out as to whether or not 3D will catch on this time around, garnering enough audience to make it economically viable. But there's little question that for 3D to gain a permanent place in the theater and broadcast and home video, 3D production is going to have to be of high quality.

Fujinon's lenses integrated into the Pace Shadow D rig configuration. Part of the quality that 3D productions will have to bring to the table is on the aesthetic side, not overdoing the 3D, minimizing the gratuitous spears thrown through the screen out into the audience. Technical quality and precision in the equipment and its setup is also critical, nowhere more so than with lenses.

"The lenses must be exactly matched," said Paul Taylor, a senior stereographer with years of experience on dozens of films and television programs in 3D. Lenses must match in zoom speed, and at any point during the zoom they must be at exactly the same focal length. The lenses must be identically in focus at the same point. "The most important property is that the optical centers must be the same throughout the range of the zoom."

To understand the concept of the optical center, think of a camera and lens aimed a dot at the very center of the image. As the lens is zoomed, a perfectly optical-center adjusted lens would keep that dot exactly in the center of the image. If not, the camera operator would need to pan and/or tilt the camera to keep the dot, or scene, centered.

Now imagine the two camera-mounted lenses rigged as a stereoscopic pair, with, let's say, the left-eyed, a perfectly optical-centered lens. However, a right-eyed lens has optical-centering problems through the zoom range. Since the stereo effect depends on offsets of left-eye and right-eye views of the scene, these mismatched lenses could yield a bizarre and unrealistic 3D scene as the lenses zoomed. Viewer eye-strain could also result.

Taylor noted that there are mechanical and software techniques to make optical-center adjustments on the fly, possibly with some loss of image quality. He said that such optical-centering problems might also be corrected through a time-consuming and expensive frame-by-frame corrective process in post production. But for live sports and entertainment venue 3D productions, there is no time for post.

It shouldn't be surprising that the two lens brands used in the lion's share of 2D sports and entertainment venue productions, Canon and Fujinon, are also the two brands doing the most work in 3D OB (outdoor broadcast) productions. Over the past year both have had their zoom lenses utilized on the highest-profile 3D telecasts, including World Cup soccer for Canon and the US Open tennis matches for Fujinon.

"We had about 32 lenses out on the World Cup," said Canon National Marketing Executive Larry Thorpe. "We learned a great deal there." The company followed up that 25-match production with a summit meeting with rig supplier Element Technica to consolidate that knowledge, and direct new development.

At the US Open tennis matches, Fujinon's lenses were integrated into the Pace Shadow D rig configuration, a standard appearing 2D OB camera setup with a stereoscopic pair of cameras and lenses mounted in a side-by-side rig atop the 2D camera's box lens. "If you're looking to do a 2D and 3D show [with both cameras] at the same location, it's the way to go," said Thom Calabro, director of marketing and product development at Fuji Film Optical Devices, USA Inc.

To the question of optimizing lenses for 3D so that they can perform identically through their zoom range, both lens makers have the advantage of already having built 16 bit encoders into their zoom lenses. "They give us the ability to measure the position of iris, zoom and focus to about .1 of a micrometer," said Thorpe. Both lens makers utilize this feedback through their controllers to optimally match lenses in a 3D configuration.

Calabro pointed to another concern in matching lenses for 3D: backlash. Backlash is mechanically created play, from gears or clutches, which prevents a lens from precisely starting or stopping a zoom, and even backing up a bit at the end of a zoom. Difference in zoom backlash between two lenses in a 3D rig could cause them to zoom out of sync, so to speak. Special gearing and clutches have minimized backlash in top-of-the-line lenses.

Both lens makers noted they had gotten a jump on development of 16 bit encoders and backlash-preventing gears and clutches because of the precision lens requirements of 2D virtual reality production.

When it comes to 3D rigs—the devices that stereoscopically position and control interocular (distance between left and right lenses) and convergence (the point in scene depth where the left and right images positionally match on the screen)—Thorpe noted that there are basically two levels of systems.

Canon lenses were used to produce World Cup coverage in 3D "Pace and 3ality [both 3D rig makers], they sort of envelope the total rig with their motors, drives, their software, their compensation techniques, and they are very proprietary. Both of them have sort of their own magic secrets for dealing with [matching lenses through software]."

On a parallel tier, there is a plethora of rigs, ranging through a xylophone of capabilities and quality, which leave the lens-matching chores to the lens makers. "So that's where we felt an obligation to try and work with them, and make our lenses more friendly," said Thorpe.

It should come as no surprise that both lens makers admit there is no such thing as a perfect zoom lens, given its 25 or more individual optical elements, some of which move during zoom and focus control. "The main thing is that we've been building lenses that will operate satisfactorily in 3D, meaning that the tolerances are such that they track, optical axis-wise," said Calabro.

So, how good is good enough when it comes to lenses for 3D? Good question, said Thorpe. "There's still a discussion going on with end-users, camera manufacturers and ourselves. We're beginning to zero in, but nothing final. We're hoping to see a document come out that we can all agree to. And then we would switch the onus to our manufacturing to see if we could achieve those tolerances."

He said Canon's aim is to design all zoom lenses to achieve the same quality level in 3D as they do in 2D, so the lens could go out on a 2D shoot one day, and with a similar model lens on a 3D shoot the next.

As a 2D videographer or OB broadcast producer, with no 3D projects on the horizon as far as you can see, what's in all of this for you? Just as the pioneering HD lens R&D brought lens making technology that also benefitted those engaged in SD production, the leading edge technology lens makers are developing to satisfy 3D productions will no doubt lead to improvements in the lenses used by the rest of us.