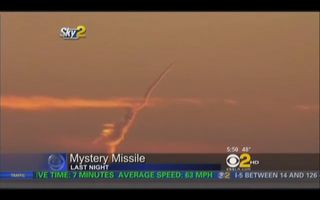 LOS ANGELES:A KCBS-TV news chopper captured more than tangled traffic Monday evening during the start of rush hour. The Chopper 2 team spotted the contrail of a missile swiftly rising vertically off the coast of Los Angeles around 5 p.m. Pentagon officials were still trying to determine whom and what launched the missile Tuesday morning. Officials told the Los Angeles Times, however, that it “did not pose a threat to national security.”

The missile appeared to be launched out of the sea north of Catalina Island. A Navy official said it wasn’t responsible for the launch, and the command at Vandenberg Air Force Base said they’d had no launches since Friday. Robert Ellsworth, former U.S. Ambassador to NATO and a former Deputy Secretary of Defense speculated that it could have been a submarine exercise related to President Obama’s visit to Asia.

Pentagon spokesman Col. David Lapan told Stars & Stripesthat the missile could be a commercial endeavor, but there was no way yet to know. KCBS has video of the incident.
-- Deborah D. McAdams