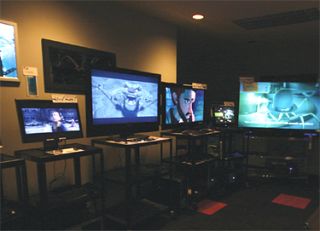 LOS ANGELES
As the industry embarks on introducing 3D into the home, questions are being raised about potential health concerns caused by prolonged 3DTV viewing.

The 3D lab at USC's Entertainment Technology Center New 3D-capable TV sets hitting the market this summer are accompanied by consumer health alerts. Samsung's notice "Viewing TV Using the 3D Function" warns of "motion sickness" and "perceptual after effects" and cautions, "Some viewers may experience an epileptic seizure or stroke when exposed to certain flashing images… please consult with a medical specialist before using the 3D function."

Panasonic 3DTV's present an on-screen warning saying, "In the event you experience dizziness, nausea, or other discomfort while viewing 3D images, discontinue use and rest your eyes", and Hyundai's "Safety Tips" include, "Do not watch 3D video continuously for multiple hours. When you are viewing stereoscopic images, please take a break every 15 minutes."

But does this caution represent real world human risks, or does it reflect the concerns of lawyers fearing liability claims resulting from the introduction of a new viewing technology?

Last month, market research firm Displaybank predicted that the four major players in home 3DTV manufacturing, Samsung, LG, Sony and Panasonic, will have combined sales of 6.9 million sets in 2010. At the Business Conference Keynote during the SID Display Week conference in Seattle, Sony President and COO Stan Glasgow reported on his company's survey that indicated 38 percent of consumers will buy a 3DTV within a year and 67 percent say their next TV will be a 3DTV.

That's why there is increasing concern over whether these optimistic sales figures will result in industry profits or consumer headaches.

In April, Panasonic announced that it would begin working with USC's Entertainment Technology Center to research the "psycho-physical" effects of long term 3D viewing at home.

"Our primary concern is that there are no large-scale studies to determine the health effects of long term 3D viewing," said Phil Lelyveld Program Manager, Consumer 3D Experience Lab of the ETC@USC. "We know that some people are affected by it, but we don't know what percentage of the population that represents."

However, one research group that has pursued this question is the UC Berkeley School of Optometry where they have initiated multi-faceted research into extended home 3D viewing. Professor Martin Banks, who heads up the lab reported, that "there is documented evidence that 3D presentations can contribute to visual fatigue and discomfort. The evidence concerns what we call the 'vergence-accommodation conflict.'"

One of the senior researchers in Prof. Banks' lab, David M. Hoffman, Ph.D., explained this "vergence-accommodation conflict" is caused by a home 3D viewer's eyes focusing at a distance that differs from the point of visual convergence. "In the real world, focus and convergence are correlated," Hoffman said. "But if you put someone in front of a stereoscopic display, that relationship is entirely lost. This convergence conflict can lead to acute symptoms of visual fatigue in prolonged home 3DTV viewing."

The "vergence-accommodation confl ict" is caused by a home 3D viewer's eyes focusing at a distance that differs from the point of visual convergence. The goal of the 3DTV industry is to reproduce the theatrical 3D viewing experience in the home, but in order to support 24/7 3D content delivery networks, consumers will have to be able to watch their screens longer than a typical visit to the Cineplex. Panasonic believes their "Full 3D" plasma consumer displays presenting 1080p images to both left and right eyes through active, shutter glasses, will be most conducive to comfortable viewing.

"This provides the best technical set-up for home 3D viewing," said Peter M. Fannon, vice president, corporate & government affairs, Panasonic Corporation of North America, who also chairs the 3D Working Group of the Consumer Electronics Association. "We are undertaking a literature search right now and should have the beginnings of the most recent research from both the medical and vision science communities available by the end of this month. Panasonic feels a Full 3D display in the home at 120 Hz most closely replicates the experience of natural vision since it effectively presents everything the human eye can see."

On the other hand Hyundai has opted to manufacture LCD displays that can be viewed with the kind of passive, circular polarized glasses used in most 3D cinemas.

"We believe that passive glasses will result in less eye strain than active lenses because there is no lens flickering to affect the eyes," said Mike Kim, sales director, Hyundai IT America. "Our polarized glasses should prove easier on the viewers, but this is a matter of the technology of 3D itself. Anyone with eye problems should avoid watching 3D."

Finally, there is the dream of glasses-free or autostereoscopic displays someday maturing into a true home theater alternative. One of its leading proponents is Alioscopy, and their president, Philippe Roche, says they have developments in their R&D pipeline that could make this multi-view, lenticular lens-based display approach ready for primetime in the home.

"From a physiological perspective, any glasses-based 3D system inherently means you lose the notion of space around you," Roche said. "That's why we believe that an autostereoscopic display may potentially prove more comfortable for extended home viewing of 3D."