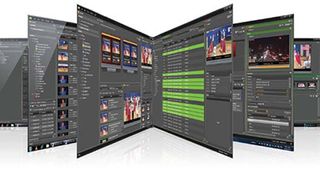 SAN FRANCISCO—Social media has become ever-present these days, even infiltrating the sacred back room of the broadcast engineer, but not in the way you might first think.

Grass Valley Stratus media production tool While no superfluous hashtags about Lady Gaga fashions are flying back and forth, the pervasive force of social media has found a home in the backroom of broadcast stations nonetheless, and in a way that’s likely to be a permanent one. It comes down to revamping technology in ways that reflect the evolution of the marketplace—and in this case, that means building social media features into master control technologies, a suggestion that would have been unheard of five years ago.

One new means of monetizing content involves building opportunity right into the originating technology—a trend that has now cemented itself in the engineering backroom as a part of a station’s master control set up.

This is translating into a tremendous opportunity for broadcasters, he said. “What they have to do is make sure they intelligently leverage the tools and technologies that allow them to do that efficiently,” he said.

Grass Valley is attempting to do that with equipment that includes the K2 Edge play-out device, RTic data source collection module, and the Stratus media production tool, which allows for integration with data sources and gives a master control operator the capability to address social media approvals before a piece of content hits the air. Stratus allows networks to insert an auxiliary like a tweet, “so that when consumers are looking at the companion app, they can interact socially” in conjunction with the programming on air, Holtz said.

“A lot of producers of different content are looking to encourage viewership through social media during preproduction and production via companion apps,” Holtz said. “There’s a huge demand for it. What broadcasters are looking for is the most efficient way to provide this. It involves both a technical solution as well as expanding beyond traditional means of delivery.”

Grass Valley has tackled the issue with a mix of live streaming support, messaging that allows a user to add in social media messages for embargoed content, regionalized content and hyperlocal ads for individual mobile devices.

Though large-market stations have been the first to adopt the technology in many cases, interest is spreading across most markets. “A lot of this work is about trying to provide a platform for customers to feel that they are interacting with the media they are consuming,” said Sam Peterson, director of Product Management for Playout, for Grass Valley.

BRANDING VIA SOCIAL MEDIA
That’s been the case for Ross Video as well, which has seen a trend in small-market stations peeking into master control technology to address the social media issue.

The Ross MC-1 master control solution has been designed not as a single piece of hardware with 16 or 32 inputs, but with a modular approach “where we can share all the inputs in the front end and then rebrand,” he said.

“It’s really our view to maximize their investment,” Welsh added. “Master control is an expensive investment and [in this way] a station has the ability to rebrand its output for all of a station’s distribution networks, which allows them to take advantage of different sources of advertising.”

What is unique about the solution is Ross’s modular approach. “A station can put in a routing switcher, deploy one or two master control units and six months down the road when a station wants to do a Web delivery channel, we can re-insert more mixer/ keyers to allow a station to repurpose content with minimal investment,” he said.

“Cloud-based content continues to become more important in the live production environment,” said Steve Ellis, Broadcast Pix CEO. “Whether it’s a Skype video interview or tweets, [this technology] makes it easy to ingest and manage content and then include that content on the air without lip sync or formatting issues.”

Snell, too has met the social media call through its Morpheus playout automation and ICE channel-in-a-box system.

“Snell can also offer second-screen solutions that tie in frame accurately to any moment within the media that is on air. So any viewer watching a TV channel, for example, can be presented with lots of supplementary content on their tablet at key moments,” Young added.