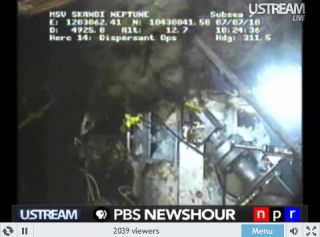 GULF OF MEXICO: In-Stat says forget the Olympics or any of the World Cup soccer games. The BP oil spill is shaping up to be the Web’s longest running live video stream. The feed began after BP’s Deep Water Horizon off-shore drilling rig exploded and sank April 20, killing 11 workers.

“BP is providing a live video feed from the site of the spill, which is now the longest continuous running underwater online video feed in the history of the Internet,” In-Stat said. “What’s happening with the oil spill is providing a taste of how a single compelling piece of content can become a jumping off point that engages hundreds of millions of viewers, each with their own, completely personalized version of what’s going on.”

Traffic numbers for the video feed are hard to pin down because it’s running on multiple sites across the Internet. BP itself has several feeds from various robotic cameras. Skandi ROV1 appears to be the continuous feed. PBS’s oil spill Web site is running a Ustream feed of the spill that listed more than 2,100 live viewers Wednesday morning. Ustream itself showed 2,050 live viewers for the feed, and more than 9.3 million total views since June 2.

To provide some perspective, nearly 183 million viewers watched an average of 186 videos each for the month of May, according to comScore. On TV, ABC won Monday, July 5, prime time (8 to 11 p.m.) with an average 7.8 million viewers.

Many more sites are running the feed. As of Wednesday morning,The Times-Picayune’s feed from Skandi ROV1 was shared on Facebook 2,115 times. The same one at The Huffington Post was shared and tagged nearly 15,000 times. WKRG-TV of Mobile, Ala. and Pensacola, Fla., had 388 live viewers watching an embedded Skandi feed from Livestream. CNN’s stalled feed didn’t have viewer numbers. The Environmentalist is running all the BP feeds simultaneously, as is the House Select Committee on Energy Independence and Global Warming (here). YouTube, which accepts only short videos, has 55,200 of them that come up in a search of “BP oil spill.”

“It’s created an ad hoc universe of connected links, counter-links, and embedded links that present an excellent model of how media in the future is going to operate,” In-Stat said. “The story has so many angles of approach that all of the major TV-based news services have launched oil spill sub-sites, and they are constantly encouraging people to go to those Web sites for more of the story.”

Across all media, the life of the oil spill story is waning, even though it dominated the newshole for the week of June 28-July 4, according to the PEJ News Coverage Index. The threat of a hurricane in the Gulf propelled the story into 15 percent of the week’s newshole--No. 1 for the week, but down since June 14-20, when it filled 44 percent of the newshole across print, online, network TV, cable and radio. The spill dominated half of the network TV newshole that week versus 23 percent for June 28-July 4.

“The significant drop in coverage... suggests that barring new dramatic developments, media interest in the story may be flagging after a long run of major coverage,” PEJ said.
-- Deborah D. McAdams