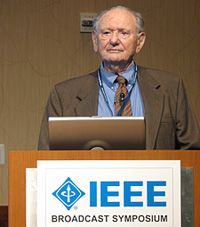 Of special interest in the post-DTV transition world, was an examination of problems with off-air digital television reception. While no single factor was identified as causing viewer problems and dissatisfaction with the new U.S. delivery system, speakers pointed to inadequate and unrealistic transmitting power levels as assigned by the FCC, interference from consumer electronic devices within viewers homes, interference from FM stations located near the top end of the low-band VHF television spectrum, antenna movement, and in some cases, consumers attempting to receive DTV signals in such signal poor areas that even analog television was not thought possible.

In all, more than 25 papers, tutorials and other presentations were featured during the three-day event, which hosted attendees involved in television and radio engineering from the United States and several foreign nations.

The event got under way on Wednesday with tutorials covering signal coverage and measurement techniques, as well as an in-depth look at some of the short comings of the Longley-Rice propagation model prepared by Sid Shumate of Givens & Bell, and BIA Advisory Services—Dataworld USA.

Of special interest in this year’s symposium was a presentation by Jules Cohen, veteran Washington broadcast consulting engineer, on “The Transition from Analog to Digital Television.” Cohen is 92 years old, and has seen television evolve from a low-resolution mechanical implementation in the 1920s to its present 1080-line format. He traced the history of the United States involvement with high-definition television efforts and examined some of the problems that exist with getting DTV signals to viewers. Cohen was presented with a special plaque by the IEEE’s BTS president, Bill Hayes, in recognition of Cohen’s many years of service to the broadcasting profession and the IEEE.

The event also included evening social activities, a joint BTS/AFCEE luncheon on Thursday, and an awards luncheon on Friday with Andrew W. Clegg from the U.S. National Science Foundation as the featured speaker. Clegg discussed the co-existence of radio astronomy and broadcasting services.