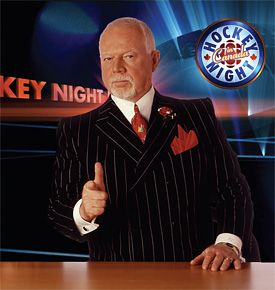 OTTAWA—If ice hockey is Canada's unofficial religion, then CBC-TV's "Hockey Night in Canada" (HNIC) is the country's regular church service. In the same vein, HNIC commentator/ex-Boston Bruins coach Don Cherry—known for his pronounced opinions and louder sports coats—is Canadian hockey's undisputed high priest. (Cherry was once voted the Number Seven Greatest Canadian during a CBC series. This put him ahead of Sir John A. MacDonald; Canada's first Prime Minister and the country's version of George Washington.)

HNIC commentator/ex-Boston Bruins coach Don Cherry Given HNIC's iconic status—its roots go directly back to 1931, when it started on radio as the "General Motors Hockey Broadcast"—3D is the next logical step for this program. To stay at TV's cutting edge, HNIC made its first-ever 3D broadcast on Dec. 11, during a match-up featuring Canada's two legacy teams, the Montreal Canadians and the Toronto Maple Leafs, at Toronto's Air Canada Centre. A second 3D broadcast is scheduled for Feb. 20 during the outdoor Heritage Classic, which will be played on the frigid ice-covered field of Calgary's McMahon Stadium between the Calgary Flames and Montreal Canadians.

"We will be bringing an experience to Canadian hockey fans that has never been done before," says Scott Moore, executive director for CBC Sports. "This is a Canadian first and a very exciting time for television and hockey in Canada."

"Scott Moore dropped by our 3D pavilion at the 2010 Vancouver games," said Ian Kilvert, General Manager of Corporate Brand Management for Panasonic Canada. "He liked what he saw, and then asked 'would HNIC look good in 3D?' I replied, 'Absolutely!' So we got to talking, and after 4-5 months, Panasonic became HNIC's official 3DTV/HDTV sponsor for this season."

It is no accident that Panasonic has chosen games that bracket the Christmas selling season. "In fact, we have already started promoting the 3D broadcasts in major Canadian newspapers like the Globe and Mail," Kilvert says. "We are also working with our dealers to set up 3D viewing areas in local bars and stores, to generate attention and excitement."

DETAILS STILL BEING IRONED OUT

At press time, Hockey Night in Canada was still deciding on the details of its two 3DTV broadcasts.

"We do know that we will be running entirely separate crews for the 3D shows," says HNIC Senior Producer/Director Sherali Najak. "This will include the on-air talent, because the feeds they will be seeing may be different from those seen on the regular 2D programs.

The Montreal Canadians wow the crowds at Montreal’s Bell Centre—and on-air via “Hockey Night in Canada.” "We also know that we will try to duplicate the main camera positions along the side and behind the nets in 3D, leaving items like the in-net cameras and other secondary cameras in 2D," he adds. "We may also cover the players' benches in 3D as well. But the video switching style will definitely be different: 3D doesn't work well with the fast-cutting that is typically used in 2D. You don't want to jar the 3D viewer with too many cuts."

Because the 3D broadcasts will be "totally discreet productions," says Najak, CBC-TV will need to find secondary channels to broadcast them over the air. However, since most Canadians view TV via cable or satellite, the big priority is to ensure carriage on these services. "At present, we are negotiating with the BDUs."

Given the longstanding popularity of HNIC, there's little doubt that these two 3D broadcasts will generate some momentum for 3DTV sales. However, Panasonic's Ian Kilvert doesn't expect it to be sufficient to put 3DTV over the top.

"There's still not much out there on 3DTV," he said. "So we expect that 3DTV won't be something that grabs hold overnight. Still, we have always believed that sports will be the driving force behind 3DTV's success. And no sport is bigger than hockey in Canada."

As for HNIC's Sherali Najak? He is looking forward to the 3DTV broadcasts. Sadly, these programs won't feature Don Cherry and his 'what outlandish pattern is he wearing this week?' sports coats—simply because Cherry will be working the 2D show.

"That's not a problem," Najak quips. "Even today, Don Cherry is always in 3D!"