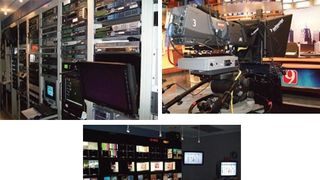 For many, the migration of a television station from analog to digital and then HD operations is a complex challenge that takes a bit of planning and careful technology choices to get right. Multiply that by three, and you get some idea of what the Griffin Communications design team and station personnel faced when they implemented the comprehensive simultaneous switchover at three Oklahoma stations in October.

To implement the move in a timely manner, Griffin Communications decided to convert the entire station group of KWTV, KOTV and KQCW at one time. So, on Oct. 24, KWTV, the CBS affiliate in Oklahoma City, debuted HDTV studio production, as well as HD spot playback, in its 10 p.m. news. Griffin's two stations in Tulsa, OK — KOTV and KQCW — went 16:9 with HD spot playback at 9 p.m. for the CW-affiliated television station KQCW, followed an hour later by CBS affiliate KOTV (a duopoly arrangement whereby the two stations share a single facility in Tulsa).

Although it had been discussed for about three years prior, the huge undertaking of physically getting it done began in earnest in January 2010, when the technology team sat down with systems integrator Beck Associates (whom they had worked with in the past) to devise a plan. Remember that all three stations were already on the air with daily newscasts and had to remain that way. There could be no interruption in service for their viewers, and failure was not an option.

The general idea was to replicate all of the technology implementation at all three stations. Equipment was purchased and delivered in June, and the next few months saw a reconfiguring of existing control rooms with multiscreen flat-screen displays running Avitech multiview software, and a spruced up production studio to accommodate the new gear.

In Oklahoma City, the master control suite was expanded to fit a new virtual monitor wall running Miranda X-16 multiviewer software and hardware. Likewise, in Tulsa, additions were made to the already existing monitor wall for 16:9 digital.

The staff was also busy training to use a revised file-based workflow that includes Avid Nitris Media Composer edit workstations and three Grass Valley HD K2 media servers (12 channels) in a storage area network (SAN) configuration at each location. Each SAN is fully loaded with 5.3TB of storage capacity.

Much of the transition was made easier by staying with the vendors originally used for the company's earlier “HD ready” SD-SDI conversion. For example, the Grass Valley K2 media servers now in place were a simple upgrade of existing Profile servers. They also implemented new Grass Valley K2 Summit and K2 Solo servers to handle ingest and file conversion, in tandem with Telestream FlipFactory transcoding software. In the production control rooms, servers are operated in multichannel “ChannelFlex” mode, whereby key with fill clips are combined into one server channel and fed to the Kalypso switchers.

The company's existing Grass Valley Kalypso Duo switcher in Oklahoma City was easily upgraded from SD to HD capability, as was the Grass Valley Trinix NXT 512 × 512 routing switcher, which was initially populated with both SD and HD material. This made it easy to work with the Avid Unity systems at each location, maintaining mezzanine level and lower level compressed versions of their news content. The Kalypso Classic in Tulsa was switched to 16:9 SD mode, with the station's 7500 router already capable of handling 16:9 SD.

KOTV now operates two control systems for playout of clips from its K2 servers involved in newscasts — the Avid Command and the Advanced Media Protocol (AMP). The AMP specification allows production staff playout of two channels of key/fill wipe transitions, controlled directly by the Kalypso from the switcher panel. The same holds true with Command for two channels controlled by iNEWS rundowns with MOS for opens and mini-opens. There's an Avid Unity storage system and Nitris Media Composer edit station at each facility, as well as an NVISION master control switcher. KWTV had also installed an Avid ISIS storage system a year ago. Program and commercial elements are created on Avid Nitris for HD and Adrenaline for SD, and then converted with FlipFactory before going to the K2 Summit or K2 media servers for playout to air or preproduction. In Tulsa, newscast opens and mini-opens are created and stored as HD, but played out in SD via an automatic transcoding feature of the K2 server. The K2 SAN is also used to play commercial and syndicated content to air at all stations, with Harris automation systems used for all three channels.

Working out the kinks

In all locations, one of the more challenging aspects was moving the correct file format in a timely manner between the Grass Valley K2 Summit server, the FlipFactory software and a craft editor's workstation. Both stations had used a file-based workflow for several years, but the move to HD and SD 16:9 brought challenges. Both stations debuted new station logos and a shared station graphics package, using Adobe After Effects and Vizrt. Getting all the graphical templates operational and the Vizrt systems at each station fully interfaced also presented challenges.

To this end, the set at KWTV (designed by FX Design in 2007) was built before the transition but had been designed for future HD use. At KOTV, small cosmetic changes were made for widescreen. Studio camera operators at all three stations were trained to shoot 16:9, but protect for 4:3 audiences (with seven Grass Valley LDK 4000 HD cameras in the group). News photographers began shooting 16:9 SD footage, with 4:3 protect, in early 2010 to build up a library of 16:9 file footage.

Training on the Grass Valley Kalypso Duo switcher was accomplished during downtime and after hours in many cases, when the newscasts were finished. The flexibility of the Kalypso switcher is such that the crew could use it in SD mode and then easily reconfigure it for HD operation for rehearsal. They did this for about three weeks before launch and could not have accomplished the migration as quickly as they did any other way. Likewise, Tulsa was able to switch its Kalypso Classic between 4:3 and 16:9 modes for training and preparation.

Continue on next page

Another element that helped with the transition is graphics production. All three TV stations are using Vizrt's full suite of graphics systems and platforms, so content could be shared seamlessly. Graphics can be created in Oklahoma City and Tulsa and then sent to the other station as needed. However, there are times when the staffs create their own local elements when a breaking story arises. Viz Ticker3D was also a critical part in the sharing of graphics and tying the on-air look together using crawls, logos, time and temperature during local broadcast.

The project was a success because Griffin Communications laid the groundwork several years earlier, and the current station design teams worked closely together to exchange information and thoughts about workflows, equipment placement and many other details. All company personnel embraced the opportunity to launch out into a new arena of broadcasting by contributing to the development of the many changes that affected workflows.

In the end, the move to HD was all about delivering a better product to its viewers in the most cost-effective way. And viewers have responded positively. One commented on the new on-air look by stating, “You really knocked one out of the park.”