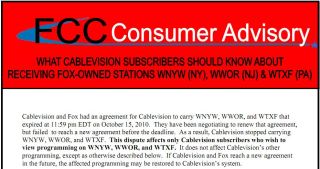 WASHINGTON: The Federal Communications Commission issued a consumer advisory today in light of the retransmission stand-off between News Corp. and Cablevision. News Corp. pulled down three of its stations from Cablevision systems last Friday. Fox affiliates WNYW-TV, WTXF-TV, and MyNetwork affiliate WWOR-TV were taken off Cablevision systems, which serve around 3 million subscribers in the greater New York area.

The FCC advisory enumerated the options Cablevision subscribers have for getting the blacked-out channels. They’re told they can subscribe to another pay service such as AT&T, DirecTV, Dish, RCN or Verizon’s FiOS. The advisory warns subscribers to be aware that Dish’s agreement for the same stations expires Nov. 1. It also suggests receiving the stations are over the air with an antenna and a digital TV set, or a converter box.

“Cable networks are not governed by the FCC’s retransmission consent rules, and unlike broadcast television stations, they are not available over the air,” the advisory states. “They may, however, be available from the other pay TV services...”

News Corp. and Cablevision have not been able to agree on retransmission terms for the Fox and other network content. Cablevision says it’s paying $70 million a year for the channels, according to CNN. News Corp. is said to want $150 million.

FCC Chairman Julius Genachowski said he was disappointed that Fox and Cablevision reached the point where networks went dark.

“Each year, thousands of agreements between broadcasters and pay-TV providers are reached without interruption of customer viewing. I remain hopeful that these two companies will do what is in the best interest of consumers and find a way quickly to resolve their differences,” Genachowski said. “While federal law provides that the terms will be set by agreement between private companies, Fox and Cablevision share responsibility for protecting their audience’s interests. I expect both companies to live up to this responsibility.”
-- Deborah D. McAdams