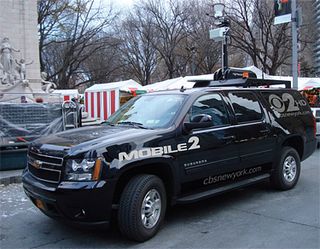 OTTAWA—For decades, ENG microwave trucks have been a staple of the U.S. broadcasting industry. But some manufacturers believe that they are on their way out, replaced by commercial 4G wireless networks (up to 100 Mbps), used to send files via laptops and wireless modems.

Fred Gerling, president of Gerling & Associates in Sunbury, Ohio notes that the company's sales of new ENG trucks are down 75 percent from 2009. The reason? "Many broadcast groups do not see the sense of investing in new microwave trucks, when 4G and eventually 5G will be available to carry video files over public networks, without need for anything more than a wireless modem," he said.

KEEPING THEM ON THE ROAD

WCBS' ENG suburban, built by IMT, features a Wilbur 2.3m mast, heavy duty cooling, dual alternators and is rack-ready. There is no doubt that the recession has cut into ENG truck sales. Gerling says that there is business out there, but it is mainly aimed at refurbishing older trucks to get a few more years' life out of them. "Stations can't get the budget to buy new ENG news vans, but they can convince management to spend a bit to update what they've got until 4G and 5G take hold," he said.

Frontline Communications, on the other hand, reports strong sales for the traditional ENG van this year, which has outsold smaller platforms by a ratio of 4:1, according to Steve Williamson, director of sales for the Clearwater, Fla. company. "There has been some migration to the smaller platforms," he said. "However, based on demand and customer feedback, we do expect broadcasters to continue to use the traditional ENG vans in their fleets."

Thomas Jennings, president of ENG truck-builder Accelerated Media Technologies (AMT), says sales for the Auburn, Mass.-based company ENG trucks "are spiking more than ever. Granted, the format has changed: You are seeing a lot more small ENG trucks based on Ford Transits, E350 vans and SUVs dedicated to barebones quick response. But the market for ENG is still very much there."

Integrated Microwave Technologies (IMT), which also builds ENG trucks in addition to its line of microwave products at its new plant in Mt. Olive, N.J., is similarly bullish about microwave's future. However, Don Hoeler, vice president of sales and marketing agrees with Gerling that bigger truck sales are declining. "They require large masts, are cost-prohibitive and require heavy operating expenses," he said.

ENG truck-maker TV Engineering also offers ENG microwave on a Ford Transit platform. "With just a 20-foot mast, plus the ability to use an inverter/charger system and shore power as opposed to an on-board generator, we are able to provide a microwave platform that costs less for broadcasters to buy and operate," says Jack Vines Jr., TV Engineering's sales manager. "And yes, our ENG sales are holding up."

MICROWAVE OR WIFI? OR BOTH?

Gerling has no doubt that 4G/5G wireless can fulfill broadcasters' needs for local live coverage, and "for distant shoots, you probably still need SNG trucks," he said. "But ENG trucks are really becoming obsolete. This is why we didn't bother bringing an ENG truck to NAB 2011."

Other manufacturers are more cautious, noting that commercial wireless can become fragile during a big breaking news event. "We think that no respectable news organization will totally depend on 4G-5G," said Hoeler. "In case of a disaster, wireless networks are the first to go down."

"3G, and 4G connectivity is great when you jump out of your car and go for your first shot," said AMT's Jennings. "But once everyone else arrives and they start eating your bandwidth, you lose your ability to get a reliable video stream out."

So what do the broadcasters think? Jeff Birch is vice president of engineering at CBS TV Stations. "3G, 4G and 5G [when it exists] are good tools to have in your kit, but in no way are they replacing ENG trucks," he said. "In fact, we are still very much in the truck business."

Keith Blaisdell, director of technology at WHTM-TV in Harrisburg, Pa. says he doesn't see his station relying totally on 4G or 5G solutions at least for the next several years. "When you need the bandwidth, you can't get it," he said. "News also happens where there is sometimes inadequate wireless infrastructure."

Birch adds that since CBS owns the microwave path from end to end, the operator can control it. "I do not own the 3G/4G path, nor the Internet path to get it back to the station," he said, "so I am totally beholden to third parties."

It is worth noting that Birch, Blaisdell and even Hoeler don't dismiss 4G/5G outright. Instead, they can see instances in which 4G/5G might be a good option, and cases in which microwave would be appropriate instead.

So are ENG trucks doomed? Not likely. But will they retain their monopoly over local live video transmissions? That's not likely either.