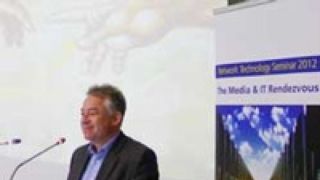 A group of broadcasters and vendors met recently at an EBU Network Technology seminar at its headquarters in Geneva. The seminar, held jointly with the SMPTE, examined the future of media transport over IP. The real-time nature of audio and video circuits, as well as the huge bandwidth needed for uncompressed or lightly compressed video, provides challenges for the network engineer. However the attraction is the utilization of what has become a ubiquitous platform: Internet Protocol, or IP.

The speakers described the issues around the carriage of real-time audio and video over computer networks.

Each advance in network technology has been matched by increases in video resolution. As 4K become commonplace, and 8K, Super Hi-Vision (UHDTV) looms on the horizon, there is no sign of the advance in video bit rates slowing down. Of course, compression advances will help, but there is no getting away from the fact that Super Hi-vision has 16 times the pixels of HD. Even S3D doubles the data rate of a system.

That said, network backbones do have large capacities. 10Gb/s is commonplace for connections and can be carried on an OC-192 fiber. OC-768 can carry nearly 40Gb/s.

Early applications for video networking are to be found with contribution links. Backhaul has advanced from analog microwave links, through satellite connections to fiber. Conventionally, video is encoded and wrapped for transport over fiber, then decoded back to HD-SDI. FEC compensates for bit errors over the circuits.

Many speakers at the seminar reinforced how the Internet provides best-effort delivery and routing algorithms are based on simple concepts like shortest path. For small files like e-mail and office documents, the transport control of TCP/IP provides reliable delivery. However, for real-time video transport layer protocols like UDP over IP provide a more suitable solution.

It is clear that some countries are better equipped than others. Mikael Lindberg, technical project manager of Swedish Television (SVT), described how in Stockholm dark fiber is available at the corner of every block. Other countries are advanced in the rollout of LTE and 4G mobile networks, much needed for backhaul of news stories.

Lindberg described how Swedish TV has upgraded its studio facilities to 1080p50 3Gb/s. The existing operation uses 720p50 rather than the interlaced standard more common in Europe. They are starting to make use of remote cameras for sports and events, with the camera control position back and HQ. The availability of more and more fiber means that it is possible to conceive remote broadcasts without the need for a conventional truck.

Lindberg mentioned how one of the challenges of installing a 3Gb/s system was the lack of interoperability between the level A and B formats. SVT has chosen the A format.

Peter Symes of the SMPTE explained how the requirements of broadcast departments have a mismatch with the IT departments. Broadcasters "would love to run media operations on standard IT hardware and software, but they must avoid unique in-house solutions. The role of SMPTE and EBU is to create middleware and media standards" that enable the use of commodity IT, he said.

Symes cautioned that neither SMPTE nor EBU should act alone, but must cooperate with other trade bodies and standards groups. One example cited was the developments in synchronization and time code standards to replace the SMPTE 12M Time and Control Code. An existing standard, IEEE 1588, Precision Time Protocol (PTP), provides much of the needed functionality, although as was pointed out, the fathers of NTSC slipped in that nasty 1000/1001 factor that engineers still wrestle with today. It created the need for drop-frame counting and complicates standards conversion. Some of the drawbacks of SMPTE 12 include lack of support for high frame rates (120fps) and the limit of a 24-hour count, so the status quo is not an option for the future.

Kevin Gross of AVA Networks described some of the issues in using an IP network for the carriage of audio. These include synchronization, QoS and connection management. The AES has initiated a project, X192, to specify protocols and interoperability guidelines for professional, low-latency streaming audio over high-performance IP networks. For the audio community, the demise of ISDN has made alternatives a pressing requirement.

Why move from HD-SDI and AES over XLRs? It's all about cost-savings and the ability to leverage commodity IT platforms. At one time, it was not possible to convey real-time audio and video over computer networks, so a special interconnect was essential for the broadcast sector. That is no longer the case. Expect to see more RJ-45s and optical connectors in future TV stations, in everything from cameras though to the transmitter feeds.