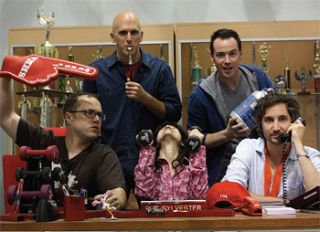 HOLLYWOOD—As the highest-rated new scripted series of the 2010 season, and with a Golden Globe, 19 Emmy nominations, and even a Peabody Award to its credit, 20th Century Fox Television has a raging pop cultural phenomenon on its hands with the success of their prime time musical/dance hit, "Glee".

The series follows the high school hijinks of the members of McKinley High's glee club, the New Directions, as they deal with life, sex, and the exhilaration of being teenagers. Its 15 returning regular characters including budding stars Rachel (Lea Michele), Finn (Cory Monteith), and Mercedes (Amber Riley) have earned two certified Gold Albums.

But according to Ashley Contino, the post production supervisor for the show's production company, Ryan Murphy Television, the editorial teamwork behind the scenes is as elaborate as the on-screen choreography that has earned "Glee" such a fervent audience.

"This year has been especially crazy because our air dates were so tight," Contino says. "Since there is nothing like it on TV, we are all kind of learning as we go. Trying to finish 22 episodes this season alone, it's become much more of a challenge than anyone expected."

They all work with individual Final Cut Pro NLE systems running on 8-core Mac workstations, ingesting digital dailies from the 35mm film shot on set in single-camera style into about 2 terabytes of source and effects storage per episode. The team cuts with DV quality 16:9 QuickTime files and then conforms each episode in Apple's ProRes 422 HQ format before sending it out to the Encore Hollywood facility for final color correction, titling and preparation for network delivery on D5 tape.

Each editor gets credit for the episodes they are assigned, and edits both the narrative and musical sequences. But collaboration is key to their success. "It's very common that we will knock on each other's doors and say 'Hey, do you want to take a scene from me?'," explains Crotzer. "We like to throw it around because it gives each other feedback and makes for a better show."

With as editing-intensive a show as "Glee", a lot of the magic happens in the edit bay. Or as lead editor Buecker puts it, "We don't really know what the tone of an episode is until we get it up on its feet. So a lot of our joint efforts are geared toward streamlining the steps until we can watch a show in its entirety."

The "Glee" editing team includes (L to R): Joe Leonard, Brad Buecker, Fabienne Bouville, Doc Crotzer and John Roberts Often needing to complete an episode a week, the post production schedule on "Glee" is unrelenting. Brad's team gets five days to complete an editor's cut, then four more working with the director to incorporate his or her input, two days for the producer's cut and three or four more days for the executive producers to lock the show.

"We try to make sure the cut at this point is about 2 minutes over its nominal 43 minute run time to make it as easy as possible for the executive producers and co-creators Ryan Murphy, Brad Falchuk and Ian Brennan to turn it around," Buecker explains.

Even though as overwhelming a production as "Glee" is a massive collaboration between producers, writers and directors, the editors have been encouraged to contribute their creative input. For Joe Leonard, one of his most satisfying instances came during the beginning of the episode "Throwdown" that aired in its first season, in which the school's "Cheerios" cheerleading squad's instructor, Sue Sylvester (Jane Lynch) and the Glee Club's faculty mentor, Will Schuester (Matthew Morrison) are embroiled in a heated slow motion argument.

"We suggested that the 'O Fortuna'" movement from Carl Orff's 'Carmina Burana' would evoke the intensity of their confrontation," Leonard recalls, "and the producers and our music supervisor, PJ Bloom, liked it so much they left it in."

For its fans, "Glee" is as much an attitude as a weekly series. Many of the episodes deal with the New Directions singers trying to win various levels of performance competitions, but as their faculty instructor, Mr. Schuester, told them during the "Journey to Regionals" episode seen on June 2, "Who cares what happens when you get there, when getting there is so much fun?"