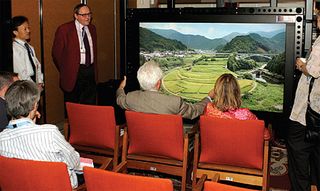 GENEVA, SWITZERLAND—HDTV not good enough for you? UHDTV, ultra-high definition television, is coming! Developed by Japanese broadcaster NHK in the 1990s, what looked like a pipe dream is materializing.

A demonstration of 7680x4320 UHDTV Super Hi-Vision with 22.2 multichannel sound using an 85-inch LCD screen was held at ITU’s headquarters in late September. Both screens are the only two prototypes made public. According to David Wood, chairman of the International Telecommunications Union Broadcasting Service Working Party 6C within the EBU, "…it's serious." That statement is backed up by the fact that NHK mounted a demonstration of the 8K level UHDTV system, 7680 x 4320 pixels, with 22.2 multichannel sound, at the ITU in September, and that NHK said it plans to begin test broadcasting of 8K UHDTV in 2020. In support of this, discussions are underway between Eutelsat, Luxembourg-based satellite company SES, and NHK about the possibility of using the 22 GHz band to broadcast UHDTV. This should be of great interest to all broadcasters, because again according the "David Wood theory," "quality acts on us subliminally, and the higher the quality, the longer we will watch."

FROM HOME TO THEATER

As a point of reference, 1920x1080 HDTV has a total of about 2 million pixels per frame, so these two levels represent either a four-fold or a 16-fold increase in image data per frame. Frame rates run the usual gamut from 23.98 through 60 and even 120 frames per second, progressively scanned. At its highest level, 7680x4320 at the 120 Hz frame rate results in a pixel write-out of nearly 4 gigapixels per second. Bit depth is specified at 10 and 12 bit coding.

Japan broadcaster NH K sponsored the EBU UHDTV demo in September. The document also states that, "it is expected that the 3840x2160 system may find its main application for delivery of television to the home (where it will allow using displays with a screen diagonal of the order of 2.5 metres [about 8 feet]) and for large screen (LSDI) presentations in theatres, halls and other venues," and that the 7680x4320 system of UHDTV "may find its main application in the delivery of LSDI programming to theatres, halls, and other venues such as theme parks, when extremely large screens must be used."

Two sets of YUV component color equations have been specified, each of which has certain advantages. Study Group 6C is currently planning a series of tests aimed at selecting one of these two equation sets.

NHK recognized the importance of 3-D audio to accompany UHDTV, and developed 22.2 multichannel audio, which accompanied the demonstrations at ITU, (in fact, the demonstration included some audio-only programs accompanied by still pictures, for critical listening evaluations). ITU-R.BT 6C has developed a set of audio requirements, but has not yet agreed on an audio system. The 22.2 multichannel sound system is one candidate.

In addition to the recent demonstrations, in September a trial UHDTV link was arranged between London and Amsterdam and plans are under way to cover part of the 2012 Olympic Games in London in UHDTV, to be screened at public venues around the world. Additionally, in 2011, NHK helped to develop the world's first 8Kx4K LCD.

The ITU demonstration used an 85-inch LCD screen, fed with a 7680x4320, 60 frame-per-second, 10-bit signal, carried on 16 HDMI channels. The 22.1 multichannel sound portion of the demonstration used a frontal loudspeaker array integrated with the LCD display, and 102 loudspeaker units to reproduce side and rear sound. It is apparent that the audio portion of UHDTV is very important to its developers.

If you thought cutting-edge technological innovation was a thing of the past for television broadcasting, this should serve to change your mind. The future is going to be very exciting in the world of television technology, make no mistake about it!