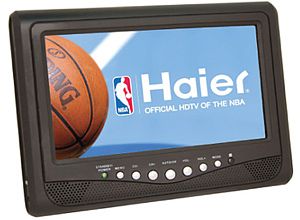 WASHINGTON—An ATSC television receiver for less than the cost of a Blu-ray disc?

It's true. The Newegg.com website store has been offering the 7-inch LCD Haier for a mere $24.99, including remote control, rechargeable battery, AC/car power supply, and detachable antenna.

(To put this in perspective, the first commercial transistor radio—the Regency TR-1—sold for $49.95 when it was introduced in 1954. That's more than $400 in today's money.)

The set actually has two tuners—ATSC and NTSC—in case you want to watch legacy LPTVs that haven't converted to digital just yet.

Shipping is an extra 11 bucks or so. However, at press time the Newegg site was reporting that they were "out of stock" of the normally $79.99 "recertified" sets being offered at the $24.99 price.

The little DTV lists elsewhere for $129.99 and is available as "new" from several Web-order outlets in the $40 range. (Amazon.com is currently offering it at $49.98 with free shipping.)

Prospective purchasers should keep in mind that this is not an HD set, and while it is portable, it doesn't work with Mobile DTV signals.