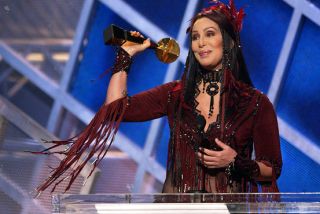 LOS ANGELES and WASHINGTON: Critics railed against yesterday’s federal court decision vacating an FCC censure of fleeting expletives. The FCC had determined that celebrities cursing on live awards shows was indecent, while the same language in the film “Saving Private Ryan” was not. A three-judge panel of Manhattan’s Second Circuit Court of Appeals ruled the FCC’s application “unconstitutionally vague.” The Parents Television Council, a watchdog advocate of family-friendly TV content, slammed the ruling, as did FCC Commissioner Michael Copps.

“Sadly, the court focused its energies on the purported chilling effect our indecency policy has on broadcasters of indecent programming, and no time focusing on the chilling effect today’s decision will have on the ability of American parents to safeguard the interests of their children,” Copps said in a statement. “I hope that this decision is appealed--and ultimately reversed.”

The Parents TV Council said the court’s ruling “greenlight[s] the airing of unedited profanity at any time of day on broadcast television.” Tim Winter is president of the PTC.

“Let’s be clear about what has happened here,” Winter said. “A three-judge panel in New York once again has authorized the broadcast networks unbridled use of the ‘F-word’ at any time of the day, even in front of children. The court substituted its own opinion for that of the Supreme Court, the Congress of the United States, and the overwhelming majority of the American people. For parents and families around the country, this ruling is nothing less than a slap in their face. FCC Chairman Julius Genachowski and the Obama Administration must immediately appeal.”

The fleeting expletives case evolved out of a March 2004 FCC broadcast indecency dragnet resulting in $4.5 million in fines and several related censures. Fox in particular was held accountable for expletives uttered by Cher and Nicole Richie during live telecasts of the Billboard Music Awards in 2002 and 2003, respectively. The FCC had previously ruled that Bono’s use of the same word acceptable, then reversed itself.

Fox led the legal campaign against the FCC censures, and the Second Circuit sided with the network while avoiding a First Amendment debate. The case proceeded to the U.S. Supreme Court, which voted 5-4 in favor of the FCC and directed the lower court to take up the First Amendment issue.

“The commission’s decision to look at the patent offensiveness of even isolated uses of sexual and excretory words fits with the context-based approach we sanctioned in Pacifica,” the original 1978 case defining indecency. “Even isolated utterances can be made in ‘pander[ing ,] . . . vulgar and shocking’ manners and can constitute harmful ‘first blow[s]’ to children. It is surely rational if not inescapable to believe that a safe harbor for single words would ‘likely lead to more widespread use of the offensive language.’”

Yesterday’s decision by the Second Circuit emphasized the FCC application of indecency rules, rather than the rules themselves. “Saving Private Ryan” was given a pass on the basis of “artistic necessity,” while the same language in a PBS documentary on the blues was not. The use of the word “bullshitter” on CBS’s “The Early Show” was first found profane and then legitimate because it appeared in a “bona fide news interview.”

When Judge Pierre Leval asked during oral arguments if a show warning teenagers about premarital sex would be permitted, the FCC attorney replied, “I suspect it would.”

“With millions of dollars and core First Amendment values at stake, ‘I suspect’ is simply not good enough,” Judge Rosemary Pooler wrote.

The judges concluded the FCC’s current indecency policy was unconstitutional, but that didn’t mean the agency couldn’t create one that endured constitutional scrutiny. Copps jumped on that point.

“As even this court recognizes, the FCC has the power to create a constitutional and enforceable indecency policy,” he said. “I’m convinced we already have one. In light of the uncertainty created by today’s decision, I call on this commission to move forward immediately to clarify and strengthen its indecency framework.”

Winter said the PTC would “vigorously work to defend the FCC’s legal authority to preserve the public airwaves as the last bastion of safety for children and families.”
-- Deborah D. McAdams
See...
July 13, 2010: “Federal Court Boots FCC Indecency Rules”
The court said that the FCC’s application of indecency rules “chilled a vast amount of protected speech dealing with some of the most important and universal themes in art and literature.