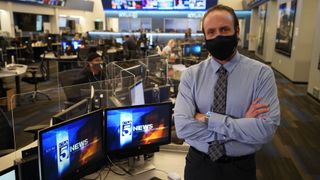 MIAMI BEACH, Fla.—The year 2020 has forced many changes on TV broadcasters—one of the most visible has been through electronic newsgathering. With more sources stuck at home, broadcasters have increased their use of Zoom, WebEx, Skype and other consumer-grade Wi-Fi video conferencing services to help deliver the news.

Although broadcasters have used these services in the past, their use was certainly not as ubiquitous as what is seen today. Six months ago, broadcasters had the luxury of considering these services “sub-par quality” for professional TV news (and still are), but the social distancing prompted by the coronavirus pandemic has forced the industry to improvise.

For many others though, the events of this year are only increasing their use of broadcast-quality IP technology from companies like TVU Networks, LiveU, VidOvation/AVIWEST, Dejero, among others. The difference is usually easy to spot since broadcasters recognize the pitfalls of home Wi-Fi setups and streaming technology from screen freezing and tiling to audio degradation or complete audio loss.

To try to understand how ENG has been impacted, I reached out to some of the leaders in ENG technology for their feedback. As viewers, we certainly see a lot of non-broadcast video and audio hitting our TV screens (whether it’s a local station or a national news network). Sometimes this is out of necessity of a last minute interview where the guest is using consumer/enterprise streaming technology.

It’s also very interesting to see audio and video we’d never accept as “good enough” now being accepted. But technology is adapting to the times and finding new ways to use IP with bonded cellular technology (in addition to Wi-Fi) to create bandwidth that can even allow UHD video in HDR and 60ftp to go this route with as little as a half-second of latency.

Though some broadcasters adopt enterprise-level streaming technology—which can provide up to 1 Gbps connections—this can still only offer 15 fps and at bit rate that depends on how “slammed” the service is at that moment, causing pixilation, jerky video and lip sync for guest remotes. There are better broadcast-quality IP solutions, and they offer a variety of supportive technology including intercom, IFB and even return video teleprompting or confidence monitoring from the field.,and all done with under a half-second of latency in most cases.

IT’S NOT ALL IP’S FAULT

TVU Networks in Mountain View, Calif.—which has been pushing the envelope with IP-based broadcast technology—has seen 500% growth over the past year, according to CEO Paul Shen. Unlike consumer options, TVU for IP runs a broadcast quality signal and locks all signals together, so the signal can be 60p and lip sync is treated as critical (unlike the streaming consumer options).

Shen calls TVU’s connection to the cell system “IS+.”

“IS+ stands for inverse stat-muxing, where we are monitoring the quality of signal and bandwidth of the carriers and adjusting encoding bandwidth as the service may increase or decrease,” Shen said. “If one carrier drops, we immediately adjust to compensate through the other carriers, or Wi-Fi or the wired connection if they are also in use. TVU’s systems also easily allow users to use the cloud to produce multiple cameras as a switched experience or to provide a broadcast quality multiviewer image by keeping sync between all feeds.”

The fault of poor quality production during the pandemic should not all be laid at the feet of IP technology, though. Where Shen sees a weakness is not with technology, but on the “remote side” where some may not fully understand what defines a “quality shot.”

“Even people wearing the wrong shirt with a pattern that 1080i can’t reproduce can be a problem,” Shen said. “Whether it’s a shirt or tie, which doesn’t reproduce well via encoding, poor audio quality based on the lack of a mic to a $15 mic/earphone combo, to simply terrible lighting for TV, all aspects must be considered. The technical quality must be there through the right gear, but shot composition and production values should also be maintained.”

Jim Jachetta, executive vice president and CTO of VidOvation in Lake Forest, Calif., also reports an increase in use of their systems. VidOvation is the U.S.-based distributor for the AVIWEST solution for IP-based broadcasting, plus numerous other equipment offerings.

According to Jachetta, one large broadcast client has built full IP-based broadcast kits that can be sent out for use by high-profile guests or regular contributors to programs, making them truly “plug and play.”

“The system includes bonded cellular streaming systems that allow excellent bandwidth and high reliability, small PTZ HD robotic cameras that can be controlled remotely [from the control room side] of the broadcast, quality mics, IFB and everything the guest needs,” Jachetta said. “The idea was to make a system that the guest could sit in front of them, plug it in, then let the control room make the adjustment and put the guest on the air with minimal involvement by the guest.”

Matt Groeteke, news operations manager at KTLA has a large fleet of ENG, SNG and EFP vehicles, but the pandemic has increased their existing use of IP ENG technology. The Los Angeles CW affiliate uses Dejero’s GateWay network aggregation technology to provide reliable IP connectivity and the station’s own private network out to the field trucks.

The station added Dejero’s CuePoint for remote teleprompting and live returns from the station to the field to allow studio talent working from home to have full prompter use for scripts to even return video of the chroma keyed weather map behind the talent. Groeteke says CuePoint is “simple, reliable and easy to explain to the end-user.”

CuePoint allows the broadcaster to send a link for live teleprompter, program, weather computer or anything they want from their house router to a cellphone with as little as 250 ms of latency. This allows their weather people to use the weather systems from home as well (where the station even created a setup with a green screen in one of their meteorologist’s basements).

The KTLA home kits consist of Dejero Engo 260, Sony PXW 400 with tripod, iPad, Nila Varsa Deluxe Light kit and a laptop. Using CuePoint, they stream the teleprompter to the Safari browser on an iPad and route the stream to the Dejero 260 using a Dejero Control panel webpage. The Dejero 260 is connected to the Sony PXW 400 to broadcast the picture back to the station and the HDMI monitor output on the back of the Dejero 260 is connected to an external monitor at the home to broadcast the return video CuePoint feed, in this case, its house program.

IP-based newsgathering has been adopted by all the major news players, according to Sam Wasserman, CEO of LiveU in Hackensack, N.J.

In the company’s “State of Live” report, Wasserman says that “for most, IP is the primary delivery of live content now and moving forward. Social distancing, lockdowns and quarantines have increased the need for remote reporting, fueling demand for live streaming, mobile apps and live IP video sharing solutions.”

Like the others, LiveU says it has seen a sharp increase in use of its cloud infrastructure as broadcasters increasingly adopt remote operations.

“It’s rewarding to see how all our equipment, especially our Solo wireless encoder, is being used in many different ways to bring both comfort and information to people who are isolated in their homes with live coverage of virtual events,” Wasserman said.

The company also recently announced a partnership with Grabyo that combines Grabyo’s cloud-native SaaS platform, providing a range of digital video production and publishing tools such as editing, clipping and highlights, with LiveU’s broadcast-quality live video solutions, ranging from its professional-grade hardware HEVC field units and Solo wireless video encoder to its LU-Smart app for smartphones. This integration is optimized in LiveU’s new LU800 production-grade, multicamera field unit, with its inherent support for remote production workflows.

“With the growing demand for cloud-based solutions, we see huge benefits for our customers in partnering with Grabyo, an expert in cloud-based video production and editing—especially with the remote production capabilities of the LU800, said Ronen Artman, vice president of marketing for LiveU. “We’re committed to work together to enhance and simplify the content workflow, helping our customers, which include some of the largest broadcasters and media organizations, to create compelling live content from anywhere.”

WHAT ABOUT THE TRUCKS?

With the increase in the use of IP making ENG easier and more widespread, what happens with traditional news vehicles?

According to Steve Williamson, director of sales for Frontline Communications in Clearwater, Fla., ENG and DSNG trucks are still selling, but are equipped with more IP.

“The deployment of Ku-IP has increased over the last few years,” he said, adding that the hybrid technology provides a financial break from the high cost of traditional satellite time and coordinating live shots.

Using IP encoding over satellite allows stations to get connectivity in areas where there is no cell service. With bonded cellular, the availability of a mast to raise those cell antennas can make a great deal of difference as well, since clearing “ground hurdles” and simply being the strongest and clearest signal might mean the difference between a live shot in a congested area or no live shot.

As the pandemic has thrust IP-based communications more into the spotlight, the technology has improved reliability, and systems are now packed with features that didn’t exist with traditional “one-way” ENG and SNG shots. It’s also demonstrated that as the industry migrates more fully to this technology and switches off to cellular carriage, there are some tradeoffs, in particular with cost savings in microwave tower sites and traditional satellite shots, at the expense of new costs in bandwidth usage.

A decade ago when I started using IP-based technology, I threw together a system using 2.5 Gig wireless unlicensed Trango boxes for my 10 Mbps “pipe,” a Slingbox for encoding and a computer with scan converter. We’ve come a long way since then, but the premise remains the same. If you can make pictures or sounds into zeros and ones (digital), there really is no limitation to what you can do with IP.