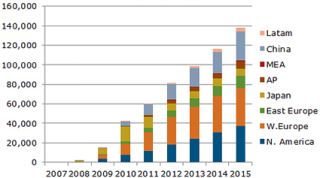 Figure 1. DisplaySearch Connected TV Forecast. Credit: DisplaySearch Quarterly TV Design and Features Report The report, “Quarterly TV Design and Features Report” from the Santa Clara, Calif.-based market research firm also predicts that the adoption of connected TVs will show plenty of growth worldwide, and will not be restricted to just developed regions. The report estimates that by the end of 2015, more than 500 million connected TVs will have been shipped worldwide.

The uptick in sales of connected TVs is attributed to the continued worldwide growth in broadband adoption, particularly in developing countries, as well as the recent decision by the Indian government to switch off analog terrestrial signals and move to DVB-T2 by 2015.

WiFi technologies are the foundation of connected TVs and services like WiFi Direct, a new wireless broadband standard that simplifies the process of connecting TVs to the Internet, enable the TV to partner more readily with handheld devices in the home, such as smartphones and tablets, DisplaySearch said.

More than 98 million TV sets with 802.11 wireless networking built in will ship by 2015, the firm predicted. “We expect that in 2015, 35 percent of 46-inch or larger TV sets in North America will be smart TVs, defined as having the following capabilities: able to retrieve content from the Internet without the restrictions of a portal; intelligent search and recommendations; upgradeable by its owner; and able to network seamlessly with other devices in the home,” said Paul Gray, DisplaySearch Director of TV Electronics Research.

The DisplaySearch “Quarterly TV Design and Features Report” is a quarterly update of the issues and rapid shifts in feature development in TV sets. The 250+ page report examines and forecasts video processor and signal processing IC market development including 120/100 and 200/240 Hz frame rates, as well as market shares for major IC vendors. In addition, the report also features forecasting for MPEG-4 decoding and the digital broadcast environment around the world, including a forecast for DVB-T2; TV connectivity, such as wired and wireless networked TVs; LED backlighting; 3D-capability and implementation; remote control and chassis design; and power consumption.