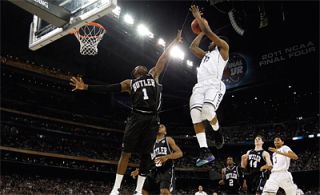 NEW ORLEANS: While Ken Aagaard of CBS Sports and Tom Sahara of Turner Sports are working hard to prepare their respective crews for the annual 67-game roundball frenzy that is March Madness, fans of college basketball are eagerly anticipating the NCAA's annual championship celebration.

Although observers would think that the overall excitement might spur the broadcast partners to offer more over-the-top camera angles, loud graphics and general buzz than usual, what's new this year is mostly a tweak, rather than an innovation.

The news this year is the use of the overhead ActionCam, which will be in use during regional coverage (as well as during the Final Four, as usual) during this year's coverage, which begins in Dayton, Ohio on Tuesday, March 13, and will culminate with the national championship game at the Mercedes-Benz Superdome in New Orleans on Monday, April 2.

"The main challenge this year isn't so much anything new, just the usual huge coordination effort," said Sahara, Turner's vice president of operations and technology. "We set a high bar last year and we want to make sure that our flawless execution continues."

Sahara sees March Madness as "a quick dash" with many games during the first couple of weeks, with the road to New Orleans starting with the First Four from the University of Dayton Arena on Tuesday and Wednesday, March 13 and 14, on truTV.

Then comes that weekend's first slew of games that Thursday, from eight arenas, across the country. "That's a lot of hardware and crews to move," said Sahara, noting the movement of the crews (of 45 people) that starts that first Tuesday.

The crews are assigned geographically "and we'll have a coordinated deployment. Where the crews go depends on the travel schedule," he said, adding that they will be kept intact and that "we have a master grid for a massive exercise to limit travel."

As for the trucks, Turner and CBS pooled their resources and will assign the trucks to the respective cities, from Pittsburgh to Albuquerque, N.M., and from Greensboro, N.C. to Omaha, for the first weekend's games. "CBS rents some trucks and we have one Turner-owned truck," said Sahara. "The rest are under the venture and are all in the pool."

The mobile units contain a basic camera and replay machine complements, "so again, we are not moving equipment needlessly," he said. Turner will use 10 cameras for each game, more than last year.

The game camera and an isolation camera for reactions will be at standard locations at mid-court on the same side, facing the benches. The other eight include handhelds under each basket; there is a low- and high-slash on a platform about 10 feet off of one corner of the court; then a high slash on the opposite side of the court for arena views, telestrator, etc.; two positioned opposite the player benches "for when the fans go nuts," said Sahara; plus two above-rim robotics.

CBS and TBS are expanding the use of the ActionCam this year to the regionals. "When we joined the venture, we added the above the rim robotic cameras," he said. "That's been a big plus."

The remaining two cameras are for wide-angles from atop the arena that will be used for beauty shots and the aforementioned ActionCam (or flyover camera), which will be employed starting with the Sweet 16.

Sahara said that the Turner truck contains Sony (often 1500 series HD) and a smattering of Ikegami cameras, and EVS machines. The DNX codec, the Avid standard that is employed by CBS, will be use to ensure the smooth exchange of content.

And in Dayton, as in most of the other venues, the crew will arrive a day early to set up. "Most venues have cabling, a few do not," Sahara said. One that doesn't? The University of Dayton.

As the tourney moves towards the big showdown in New Orleans, CBS will move in with the assistance of Clearwater, Fla.-based F&F Productions. F&F's GTX 16 will serve as the game truck, with 15 as the pre-game truck; the B units will roll in with 15 and 16, with another B unit to be used for super slo-mo. The Eye will also incorporate a Bexel edit truck.

There will be other trucks in the compound, said Aagaard, executive vice president, engineering, operations and production services for CBS, including vehicles for ESPN International and NCAA.com and, possibly, CBS Sports Network.

"That's all being decided," he said, noting the F&F trucks will include nine Ikegami HL-79Es with four Sony CDX-R3300 slo-mos and Ikegami HDL-40s robo cams, plus seven EVS XFiles and switchers for those three Final Four games.

Not surprisingly, the Final Four will involve more cameras, 23, than earlier rounds; including Ikegami HDL 50 robo cams at the foul lines. They'll be installed in the floor, and include wide angle lenses.

"[They allow] the viewer to see the basket and the shooter, which gives them an idea of the enormity of the arena. It's really a great shot," said Aagaard, who compared the production of the Final Four to that of an important regular season game, during which CBS would employ from "eight to 10 cameras."

For the opposite perspective, the ActionCam, primarily a four-point system, "can move anywhere above the court," said Aagaard. "We try to keep it under the scoreboard, which is between 22 and 24 feet up."

Aside from setting up for the games, most of what CBS has to do is prepare for the pre-game show, for which it adds two dedicated cameras and four minis that require three six-channel EVSs. The network also employs a jib (to be used after tip-off, as well) to pan the crowd, including the screaming meemies in the student sections that help give college basketball its buzz.