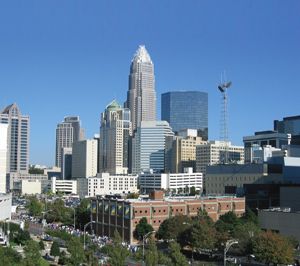 TAMPA, FLA. and CHARLOTTE, N.C.: Every four years the political rhetoric of Washington heats up and draws in not only much of the country, but much of the world. Viewers tune in to watch the greatly hyped and anticipated political conventions, when the two major parties hold their presidential nominating ceremonies and finalize their political platforms. This is an exciting time for broadcasters as well, with extra revenue coming in from political ads and hours of anticipated news coverage. It is also a major international news event with broadcasters worldwide converging to cover the nomination of the next U.S. presidential candidates.

When nearly 15,000 journalists along with officials from local, state and federal agencies all descend upon a single venue, the perfect technical storm can develop. How will they share the limited wireless frequencies for broadcast and public safety? Washington does not normally set the example for how to share nicely, but in the case of the political conventions, they have been using a formula that has worked for many years.

HOW THEY ALL GET ALONG
Every convention season, the National Political Convention Coordinating Committee (PolComm), convenes to pull it all together. The ad hoc frequency coordination group, established by the broadcast networks, has the Federal Communications Commission’s blessing to serve as the frequency coordinator and radio frequency spectrum manager at the three big presidential-related events (both conventions and the inauguration).

The name “political convention” itself denotes that politics will be involved. Bringing government officials and national and foreign broadcasters together in one venue requires some finesse to satisfy all parties involved. “We need everything to work as much as they need everything to work,” said PolComm Chairman Louis Libin when asked about the broadcast-government partnership.

“No single person can do all the coordination, so it becomes a team effort,” Libin said. There are three parts to the team; the first is Libin’s committee, then there are the local host cities, and finally the federal government. “Most people believe that all we do is coordinate with broadcasters, but in fact the major part of what we are doing has to do with the local governments and federal agencies.”

The FCC is always the lead federal agency and acts as the liaison with other federal and state agencies. For the security component, the Department of Homeland Security (DHS) and Secret Service work together jointly.

Local and federal law enforcement back up the PolComm committee with legal and enforcement authority but prefer to remain in the background. As conventions are very political by nature, much of the federal and law enforcement component prefer to have PolComm front and center. “The agencies want to be invisible, so we do the registration, coordination, approvals and are the face of enforcement,” Libin said.

In order to share information and have input on one another’s plans, each group participates in the planning of the other’s event.

“We have our committee that the FCC sits on and they have their committees that I sit on,” Libin said. For broadcasters to share their coverage plans and the government to divulge their security needs creates a unique working environment. “There is a trust and understanding between the groups, especially when dealing with confidential information.”

The trust Libin refers to is hard earned. Libin and his team have worked the last seven political conventions, earning the respect of their various partners along the way.

TECHNICAL CHALLENGES
Referring to the challenges of making it all work, “it’s about planning smart, assuming the worst and planning for it,” he said.

“There will be in excess of 2,000 frequencies being used inside the convention hall at each event,” said Howard Fine, the PolComm’s frequency coordinator and long-time member of Libin’s team. “The problem is that we have lost 30 percent of the spectrum we once had.” Another challenge is that most of the attending journalists want their own individual wireless mic and IFB frequencies. “The biggest thing is getting people to understand that there isn’t an unlimited amount of spectrum anymore,” Fine added.

When someone applies for credentials they are told that they will have to register their wireless equipment, and if they are caught using non-registered equipment they risk losing their credentials and access to the venue.

The wireless mics being used by foreign attendees utilize very similar frequency bands to those in the United States. Since the United States is the world’s largest market for wireless microphones, most foreign broadcasters use the same gear as U.S. broadcasters do. This adds to the challenge of sharing spectrum for multiple entities that are using the same equipment and spectrum range. Analog equipment is still around as well, so both analog devices and digital ones have to be coordinated to prevent interfering with one another.

To help provide more RF bandwidth options for the event, the FCC provides a special permit for the use of the 700-to-800 Mhz frequency range as well as extra space in the microwave spectrum. “It’s unbelievable they allowed it!” Libin said. “They have allowed us so much latitude within all these bands for the events.”

“This event is different than any other event,” Libin continued. “Everyone becomes a rights holder. If they are assigned a channel they then have exclusive rights to use it.” This adds to the challenge of making sure that there is no duplication or overlapping of frequency assignments.

ENFORCING THE RULES
There are several different procedures put into place at each venue to control the equipment being used. The first of these is gate control. All equipment is inspected prior to being permitted on site. The equipment must bear a sticker that shows it was preapproved by the committee to be used inside. This is followed up with spot checks, during which committee teams will stop and inspect equipment to confirm it was registered, and is operating on its approved designated frequency. The final element is troubleshooting where the committee and law enforcement monitor and track down signals that are causing interference.

The various law enforcement agencies understand the importance of communications, said Fine, who has worked on three previous conventions himself. “They are radio people and understand interference and the need to coordinate,” he said.

Active monitoring does not work in a frequency-rich environment like the convention hall, where there are too many frequencies and too high of a noise floor for easily pinpointing transmissions. In order to track down abusers and misadjusted equipment, the committee uses teams from several agencies with spectrum analyzers and directional antennas to triangulate the location of the offending equipment.

“We have found every one of them,” Fine said of his experience tracking down problems. “If someone uses a non-regulated frequency, they will have us come down on them like a SWAT team, as we have proven in previous years.”

Fine said their efforts are designed to protect everybody from licensed users to the general public. “We look out for local users first, as we don’t want someone from a foreign country taking down a first responder’s communications system,” he said.

Sometimes issues arise when something as simple as a piece of equipment is dropped and the damage causes frequency spurs that interfere with other users. With the level of importance of everyone’s work at the conventions, the committee takes its enforcement role very seriously.

WISDOM AND EXPERIENCE
“The conventions are one of the premiere world broadcast events,” Libin said. This is demonstrated by the fact that this could be a pooled event with just a few cameras, but everyone considers it important enough to require their own unique and individual take on it. “The fact is that the whole world is watching.”

Both Fine and Libin note that the experienced broadcast organizations they work with always have wired backups. “It’s not that they don’t trust wireless, they just know that with so many unknowns and factors beyond their control, they prefer to be prepared,” Libin said.

Fine also wonders why so many become dependent or require wireless microphones over a traditionally wired one. “You can tell when someone is on a wireless mic,” Fine said. He feels that sound quality from a wireless mic will rarely sound as good as that from a hard wired unit.

As long as wireless equipment is in use though, the committee will continue its work. Both men are excited about this summer’s and next winter’s big events, once again demonstrating how partnerships even in a politically charged environment can work.