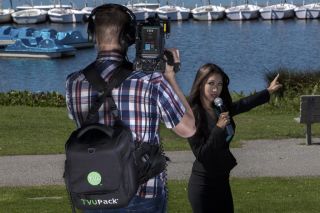 MULTIPLE CITIES—There was a time when you couldn’t convince a local news station to use the public cellular networks to transmit live video back to the station. Basically, although the prospect of eliminating an expensive microwave truck was attractive, the technology was too unreliable due to the emergence of smart phones that tended to suck up available bandwidth.

Indeed, like anyone with a cellphone could tell you, sometimes you had reception, sometimes you didn’t. The inherent advantage, however, was bringing camera operators closer to a news event than the live truck was capable of.

Today, with advance in compression, on-the-fly bit rate adjustments and a better understanding of how to find available bandwidth across several carriers simultaneously (by “bonding” different cellular carriers’ services together), the vendors of this technology, including Dejero, LiveU, and TVU Networks, are finding it a lot easier to make a sale. In fact, all four major U.S. networks—at both the network and local level, as well as the hundreds of local affiliates that produce live news—are using it for a variety of applications and giving viewers an “on the scene” experience like never before.

For example, during the recent forest fires surrounding the Colby fire in the hills above Glendora and Azusa, Calif., KCBS-KCAL camera operator J.R. Hall took his camera and a small Dejero Live+ transmitter inside a backpack and literally shot footage from inside the fire and the station broadcasted it live. Sometimes the HD feed went black and white, due to heavy smoke hindering cellular reception, but the notion of bringing viewers inside a forest fire was more than compelling.

“Thank goodness sometimes [it was] in black and white and not color because it’d be a little bit scarier if it was in color to see all that fire,” Hall said, in an interview with KCBS. “I’ve worked in some dangerous and hostile environments all around the world for CBS and this was right up there, it was pretty scary.”

“As we move forward with research and development, Dejero has invested significant resources into improvement of reliability and quality of our equipment,” said Bogdan Frusina, founder and chief technology officer of Dejero Labs located in Kitchener, Ontario, Canada. Frusina began shopping the technology in 2008 to a Canadian station and has never looked back. “Together with KA-band uplink technologies as well as traditional technologies we are now able to provide much more reliable systems where stations can rely on our gear comfortably.”

KTBS Channel 3 in Shreveport, Louisiana, has expanded its live newsgathering capabilities with Dejero LIVE+ 20/20 Transmitters. The station will soon deploy the Dejero LIVE+ Mobile App to members of the news staff, enabling them to capture and transmit live video using their Apple iPhone 5 smartphones.
He said that as wireless service carriers like AT&T and Sprint continue to improve cellular service with new 4G technologies, live video transmission reliability will benefit accordingly.

“Better compression technologies will play a big role in our success in the medium term,” Frusina said.

Another local station, WWAY-TV, the ABC affiliate serving North Carolina’s Cape Fear region (and owned by Morris Network), likes the technology so much, that, according to Chief Engineer Billy Stratton, the station has sold one of its ENG microwave vans and “we're in the process of selling the other. We have gone all-in on it!”

WWAY as well as several other Morris Network, Inc. stations (the group is made up of 14 locations in the Southeast), have gone with Dejero’s technology.

“The advantages are the obvious... lower cost than maintaining and insuring a live van... HD live shot capability without having to do major upgrades on ENG microwave TX and RX sites... manpower reduction... we are one-man-banding it, often with interns,” Stratton said. “The downside is we are in a hurricane zone and we don't yet know how these will perform with limited cell coverage during disasters.”

Similar technology from LiveU, a company based in Israel with offices in in Hackensack, N.J., is used extensively across the U.S., for local news as well as coverage of live sporting events.

In many cases it's getting more difficult to tell the difference between a cellular bonding feed and a satellite feed.
“TV stations are absolutely more comfortable with cellular bonding,” said Ken Zamkow, Head of Marketing for the U.S. and The Americas at LiveU. “When we shipped our first LiveU units, the technology was considered either a novelty or a solution for places where a satellite truck could not access. Our first big live shot was during the Obama inaugural train ride in 2009 from a moving train with NBC.”

Fast forward to 2014, when several hundred stations and broadcasters in the U.S. use LiveU on a daily basis for any type of live shot. In many cases it's getting more difficult to tell the difference between a cellular bonding feed and a satellite feed.

“The original concerns customers had were signal resilience, latency and overall picture quality,” Zamkow said, adding that there are a number of developments that helped alleviate these concerns and made cellular bonding a major part of broadcasters’ uplink mix. For one, LTE (4G) networks became available and carriers improved data coverage in general, offering excellent bandwidth in many areas.”

LiveU has also developed a number of key features that significantly improved performance. This includes internal and external antenna arrays that offer stronger signals in remote and congested areas. In addition, the technology matured from an engineering standpoint: the algorithm and video encoder became much more efficient with every software and hardware update, thus offering better and more consistent quality in situations that were challenging in the past.

“Where available, we now encode at higher bitrates and with latency as low as one second, which starts looking very much like a satellite feed,” Zamkow said. “Now customers also have a new set of expectations, like smaller and lighter-weight hardware, but with even better performance, cloud-based management systems for their fleets of transmission units, and bonding directly on Smartphones, which we believe will be the main focus among broadcasters in 2014.”

“Broadcast stations have moved beyond just feeling comfortable using cellular ENG solutions,” said Eric Chang, vice president of Marketing for TVU Networks. “As the technology has matured, we have continuously improved the transmission algorithms on our TVUPack, enabling us to deliver a more resilient signal that results in a professional-quality HD picture.”

Chang said that stations have also learned how to most effectively use TVUPack for their needs. As camera crews have become accustomed to using portable cellular transmission packs for daily use, they have a better understanding of where and how to use it to complement a station's news coverage. Stations no longer have to rely on just their satellite or microwave trucks for live broadcast, as portable cellular transmission technology like TVUPack has enabled them to go live from more places than ever before in a cost effective way.”

Transmission algorithms continue to improve, enabling stations to deliver a more resilient signal that results in a professional-quality HD picture. The next transition for stations, Chang said, is distribution of that live transmission from one station to many stations or point-to-multipoint sharing. IP-based live video routing and distribution with a solution like the company’s TVU Grid allows a group of stations to share a live video feed from one station to one or more other stations. Although stations have previously had the ability to share live shots, TVU Grid offers seamless switching that allows a station to switch between cellular transmission pack live feeds or SDI feeds using IP, which can be more efficient and cost effective since it leverages existing station infrastructure.

“We are now often told by our customers that the technology is a required tool for every broadcast newsroom,” Chang said.

It wasn’t always this way, but times change and newsgathering techniques continue to evolve as stations seek viewer loyalty and higher ratings. “Getting the live shot” however possible has never been more important. Bonded cellular transmission is another tool, in the station’s ENG toolbox.