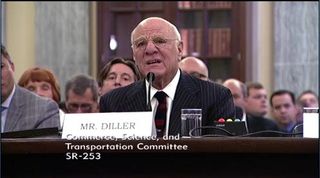 WASHINGTON: Both broadcasters and cable operators were excluded today from a Senate Commerce Committee hearing on how broadband is affecting video distribution. Lawmakers instead invited testimony from two network neutrality supporters, a Nielsen executive, and one high-profile individual being sued by broadcasters for piracy.

Barry Diller, chairman and senior executive of IAC, (pictured) testified before the committee this morning that his company, Aereo, is not violating copyright law. Aereo uses individual transceivers to pick up broadcast signals and transmit them to mobile broadband devices. Sen. Jim DeMint (R-S.C.) asked Diller, who helped launch the Fox broadcast network, what he would think of Aereo if he were still a broadcaster.

DeMint and Diller then debated over what Aereo is charging for. Diller argued that Aereo doesn’t charge for programming, but for the individual antennas.

“We’re not a distributor at all, we’re not distributing,” he said. “If you would charge that Radio Shack is a distributor for selling antennas, then we’re analogous.”

DeMint then made his position clear with a question directed at Paul Misener, vice president of global public policy of Amazon.

“Do you plan to intercept broadcast signals and resell them?” DeMint asked.

The hearing was entitled “The Emergence of Online: Is it the Future,” with Diller, Misener, Nielsen Vice Chair Susan Whiting, and Microsoft’s Blair Westlake as witnesses. Westlake and Misener delivered several plugs for network neutrality, which prevents Internet Service Providers from throttling or blocking content. Westlake also announced “Sesame Street Kinect,” a new Xbox game in which children can “interact directly with Elmo and the Cookie Monster.”

Meanwhile, comments from Committee Chairman Jay Rockefeller (D-W.V.) and DeMint suggested the hearing was as an unofficial exploration of telecom law reform. DeMint said video laws were “written for a time that no longer exists.” Rockefeller noted that cable subscribers pay for hundreds of channels and watch just a few.

Whiting hedged: “I think it’s the ease-of-use and the ability to watch whatever you want, whenever you want—it’s the access that matters.”

Diller did not: “I don’t think it’s a substitute. I do think that online can offera la carteprogramming. It will not replace pay television, but it will certainly increase in consumption.”

Sen. John Thune (R-S.D.) asked if there was sufficient bandwidth to support dancing with Elmo on the Xbox. Misener once again delivered the party line: “So long as networks remain open to consumer choice, there will be a bright future.”

“But about capacity...” Thune pressed.

“Of course it’s a problem,” Diller said. “We are slower and less deployed than 15 or 18 countries. We are also beginning to strain at capacity. The efforts for the widest broadband coverage should be mandated.”

Diller here mentioned “enough bidders should bid it up to the going rates,” though he didn’t use the words “TV spectrum” or “auction.”

Thune also asked why individual programmers didn’t provide access to their content online without a cable subscription. “What is stopping ESPN from selling content directly to the consumer?”

Once again, Diller laid it out plainly: “It would be insane for ESPN to sell itself directly to consumers. I am paying for ESPN because 100 percent of subscribers have to pay for it,” whether they watch it or not.

Sen. Mark Warner (D-Va.) questioned the panel about how rules should apply to each of them.

“We have placed, in the past, program-access rules and other responsibilities on network providers,” he said. “What should be policy ramifications of online video? What should your obligation be?”

Misener once again emphasized network neutrality, while Diller rallied for a complete rewrite of the Communications Act of 1996.

“The rules started with broadcasting 80 years ago,” Diller said. “There is a potential, positive competitor to a very closed system of program content makers—people who organize networks, whether they be pay networks or advertiser-supported networks or subscription supported networks. These players are in a system where there’s no air, because it’s completely closed, dominated by a few companies... less than a handful.”

Warner: “But what obligations shouldyouhave. Should we distinguish between traditional sources and these other conduits?”

Diller: “Rights and obligations should be across all these arenas.”

This is also where Diller noted aside that “profit margins on data transmission is in the 90s.”

Sen. Amy Klobuchar (D-Minn.) asked about broadband disparity in rural areas and low-income households, and how to address it.

“What the FCC is doing, in terms of using the old telecom funds to finance build-outs on rural areas of broadband is great,” Diller said of the Federal Communications Commission under Chairman Julius Genachowski, who once worked for Diller. “I think we do need a national policy on broadband.”

Klobuchar and other lawmakers questioned the impact of online video, otherwise known as “over-the-top” video, on local news. Both Diller and Westlake said it would survive.

“People have said local broadcast stations would be out-moded.” Diller said. “I’ve always felt otherwise. The strongest local television stations are the ones that provide the most news and key programming. I think that continues to be very vibrant. If you look at the success of any television station in any market, they are more dependent on being able to deliver news than any other type of programming.”

Westlake said local stations are adapting to video apps and will “proliferate” online.

Sen. Dean Heller (R-Nev.) requested an oversight hearing of the FCC and asked the witnesses where the video business was going.

Whiting said, “More and more people are using their tablets and PCs while they’re watching TV. As smartphones have wider penetration, that device really is a video device. That increases as well. They complement each other.”

Whiting shared some Nielsen numbers in her opening indicating that traditional video delivery platforms still dominate consumption. Based on Nielsen’s latest research, she said the average American watches nearly five hours of video each day, with 91 percent of it on traditional live television sets in real time. That said, Whiting noted that PC video consumption rose 80 percent in the last four years.

Sen. John Kerry (D-Mass.) was up next. He agreed with Diller on telecom law reform.

“We were behind the curve within six months of the 1996 bill being signed, because we really didn’t think very hard about data transmission,” Kerry said. “Whatever we do, it’s important to grow and enable this transition. We need to free up spectrum, and push out wired networks to underserved regions... President Bush in 2003 said we’d have a policy for having everyone wired. Everyone knows we’re light years behind that.”

Kerry asked Diller what would prevent him from creating his own Fox network and distributing it online. Other than a name change, Diller said, “nothing.”

“The Internet gives you an absolutely open possibility to create anything,” he said. “We’re at a very early stage. We’ve only had the ability to publish video online for a few years. You’d need to be able to offer something to someone in a payment system. This will happen over time. This is the promise of a la carte programming, and this is the greatest opportunity there is.”

Kerry asked if cable operators and broadcasters have an incentive to impede the growth of online video delivery, while noting the absence of cable and broadcast representatives among witnesses.

Diller repeated the need for a national broadband policy and said network neutrality was mandatory, “because without it, you’ll see the absolute crushing of any competitive force. If you say distributors can put tin cans and anchors around anyone they don’t own.”

Kerry also asked if there were too few protections in copyright laws for traditional providers, and too many for new entrants.

“Service providers are looking for new ways to provide it,” he said. “It is a good margin business.”

Rockefeller rounded out the hearing by saying that talking about serving poor and rural areas was more than just pandering, but that doing so was a “fundamentally American process.” He asked how to get broadband to everyone. Diller replied that phone companies were once “forced, that in return for their monopoly, they had to connect with every place in America that existed.”

Rockefeller jumped on that like a bloodhound. He said there were no phone lines to his farm in West Virginia. He also described how phone company showed up with truckloads of poles after the Upper Big Branch mine explosion because miners couldn’t get word out to their families. The catastrophe killed 29 miners.

“The general availability remains very much on my mind and I worry about it,” Rockefeller said.

March 14, 2012: “Aereo Beta Launches Despite Legal Challenges”
Aereo is launching its TV rebroadcasting service in New York despite a legal challenge by broadcasters whose signals were not licensed by the start-up.