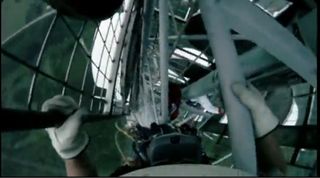 CYBERSPACE: (A new video link follows the story.) A seven-minute video of free-climbing tower technicians has the broadcast engineering community abuzz. Entitled “Stairway to Heaven,” it’s meant to illustrate a workday in the life of a tower technician equipped with a helmetcam. Instead, what generated the most attention was the fact that the shooter was free climbing.

“It starts with an elevator ride to about 1,600 feet. After that, it’s all about climbing,” the narrator intones while the technician ascends a ladder within the structure. “Once you reach the top of the tower, it’s time to go outside.”

At that point, the technician is shown climbing hand-over-hand up the side of the antenna on small metal rods.

“This is called free climbing, meaning no safety lines are used,” the narrator says. “It’s easier, faster, and most tower workers climb this way…. Free climbing is dangerous, of course, but OSHA rules do allow for it. Attaching, climbing, attaching and removing safety lines every few feet slows progress and is tiring.”

The climber eventually secures safety lines near the top of the tower.

The video originated on TheOnlineEngineer.org, a new Web site aimed at the community created by Russell Brown. It was soon viral on YouTube, according to Wireless Estimator, which focuses on tower news, information and safety. Jim Coleman, chairman of the National Association of Tower Erectors, told WE he was “unaware of any guidance by OSHA that allows for free climbing as an acceptable method of accessing elevated work.”

Brown removed the video from TheOnlineEngineer and YouTube, but it’s available elsewhere. Neither the climbers nor the tower are identified.

“The footage of the climb came from a friend of mine that does this type of work, I have know him for several years and he has helped me many times in the past,” Brown wrote at TheOnlineEngineer. “Recently he gave me this video he shot on one of his jobs. I showed him the edited video and he approved it, but not the audio, as it was added later, and I put it up on TheOnLineEngineer and YouTube over the weekend. On Monday, he was getting calls from colleagues telling him that they were concerned about what the video showed. His world is a very small one, and you don’t want to bite the hand that feeds you! Some facility owners are concerned about liability and such and may second thoughts about him if they think he does not take safety seriously.”

Brown said he’d had two offers to broadcast the video and a request to submit it to a film festival in France.

“As soon as we can, we will have more videos about tower climbing, but in a totally safe way, being tied off all the time,” he said.

While most tower workers may indeed free climb, as the video asserts, Wireless Estimator makes no bones about the danger. Beneath a shot of a technician climbing untethered in upstate New York, WE writes, “Smile for the camera since you will not be able to for your morgue photo.” The photo was taken by a retired technician who was “concerned about the number of people that do not tie off.” WE also features a “Tower Climbers Hall of Shame” featuring video of free climbers.

WE reports seven fatalities related to falls from towers so far this year, compared to five for all of last year--the fewest since 2003. That year, 13 people died while working on communications towers, three of them in Huntsville, Ala. Mohammad Ayub of OSHA said at the time that shortcuts often led to fatalities. (See “Towers of Power.”)

“I know he’s been on every tower we have,” said Bill Hayes of Iowa Public Television of Deters soon after the incident. “He’s probably been on every tower in Iowa and the surrounding states. These guys are tremendously safe. This is not a cowboy operation. These guys are good... inherently, it’s a dangerous job because if you make a mistake, there aren’t any small ones. Leo didn’t take any unnecessary risks or do anything unsafe.”

The video of the helmetcam-captured free climb is below. The embedded video was removed per a DCMA takedown request from Brown. A version is now available at Live Leak.
-- Deborah D. McAdams