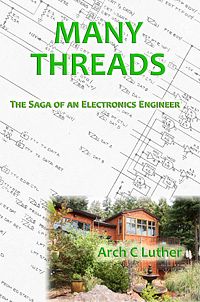 WASHINGTON
A few years ago, I had the pleasure of reviewing Dick Webb's book ("Tele-Visionaries"), which documented his career as a television research engineer at the long-departed Radio Corporation of America. At the conclusion of that review I praised Webb for revealing a substantial amount of RCA "inside information" and opined that others should come forth with their own versions of the facts so that this electronic giant's place in broadcasting history could be better understood. It is my pleasure to announce that another former RCA engineer has stepped up to the plate with his own account of what life was like at that company in the 1950s, 60s and beyond.

The work is entitled "Many Threads: The Saga of an Electronics Engineer" and was penned by Arch Luther, who spent most of his professional career in RCA's broadcast equipment division.

Like so many engineers, Luther became interested in electronics as a boy, and after graduating from high school, enrolled in MIT's engineering school. During his college years Luther landed a couple of summer jobs that would further influence his career. The first of these was in 1947 at Philco's manufacturing operation. He developed an interest in TV re-ceiver circuitry there and acquired enough bits and pieces to construct his own 10-inch receiver. This homebrew rig later followed him to school and became the first TV set in an MIT dorm. Luther recalls that—small screen or not—the receiver played to full audiences, with students crowding around his room for a peak at an early television staple—wrestling matches.

Luther spent two summers at Philadelphia's fledgling WFIL-TV, doing maintenance duties and pulling transmitter watches. The station was RCA-equipped and Luther was there during the move of its TT-5 transmitter from downtown Philadelphia to a suburban location. Such experiences further strengthened his desire to build a career around television engineering.

Luther's post-graduation job with RCA was more or less a natural. By the time he finished his studies in 1950, RCA had become the major supplier of television apparatus for the nascent industry, and Luther was quite familiar with its products from his WFIL summer job. It didn't hurt either that RCA's broadcast engineering division was located in Camden, N.J., just a few miles from his family's home. He relates that he was hired as a "Class B engineer in Broadcast Engineering."

Luther had chosen the design and construction of a television sync generator as his MIT senior year engineering lab project, and this background served as a springboard for involvement in the creation of a replacement for RCA's ponderous first-generation TG-1 sync generator. He breadboarded up an improved version that took the vacuum tube count from 80 to 20, and in the process created circuitry that became the basis for two of the 34 patents he would receive during his career: the monostable multivibrator and the generation of a composite sync signal. The new sync generator was known as the TG-2 and RCA sold 4,000 units during the product's life span.

Another of Luther's early RCA projects was in reworking and improving the company's first live color camera, the TK-40. After some design changes, this became the TK-41, and, even though it weighed so much that four persons were necessary to lift the camera head, it became the industry standard color camera for some 15 years.

In 1956, Ampex developed a practical method for video recording, pushing RCA's efforts to do so into the dust. The machine became the hit of the NARTB (now NAB) show that year, and shortly afterwards RCA threw in the towel and licensed its competitor's technology. The company then initiated a crash program to produce its own television tape recorder, resulting in the TRT-1A, a two-inch machine that rivaled Ampex's VR-1000. While Luther was not part of the original TRT-1A design team, it was not long after the introduction of the machine that he was assigned to RCA's electronic recording unit, where he remained for the next 13 years, and eventually became the division's manager.

With the emergence of the video recorder, a low key "cold war" erupted between RCA and Ampex. It differed from the mainstream Soviet Union/United States skirmish in that instead of increasingly higher tech (and more destructive) weapons being developed, the two companies engaged in a long series of "one-upmanships" centered on improving the video recording process. The first of these was RCA's addition of color recording/playback capability to the original Ampex machine.

Luther was there for most of this "war" and helped RCA fire its first major salvo with the introduction of a solid-state VTR—the TR-22—in 1961. This move away from vacuum tubes signaled the vanguard of a new generation of broadcast equipment across all company lines.

(While RCA engineers were busy with the TR-22 project, Ampex skunked them with the rollout of high-band recording which made possible multi-generation recordings—and ultimately electronic editing capability.)

This VTR war continued well on into the late 1960s, with RCA getting in their really big blow at Ampex with the introduction of the TCR-100 in 1970. This was the first VTR that could automatically load and play tapes. It freed broadcasters from tying up hundreds of thousands of dollars in multiple VTRs just to play short length commercials and PSAs during station breaks.

Of course, Ampex soon followed up with its own automated machine.

The video recorder race was an exciting period in broadcasting's history and Luther was very deeply involved in it. If for no other reason, his chronicling of these VTR developments makes "Many Threads" a must-have book for anyone even remotely interested in the technical side of the business.

Unfortunately, while this was a "good" war in terms of bringing video recording to a high level of perfection, it also marked the beginning of the end for both RCA and Ampex.

By 1971, Luther had been promoted out of RCA's electronic recording division, but does describe the industry's gradual shift away from 2-inch quadruplex recording to 1-inch helical-scan machines and the weakening of RCA's market share.

In Luther's words: "We never achieved the competitive position in helical that we had in quadruplex."

As history reveals, these words foreshadowed RCA's overall slide, not only in VTR technology, but in virtually all of its broadcast product lines.

After leaving electronic recording, Luther continued to move up the corporate ladder with a promotion to chief engineer of the broadcast systems division, and ultimately vice president of engineering. However, by the early 1980s he began to sense that the broadcast giant was on the road to oblivion.

Luther moved out of the company's broadcast systems division and into RCA Laboratories in 1984. But, by the following year there was no more RCA. Luther devotes several pages of his book in examining the reasons for the company's failure.

All in all, "Many Threads" is a delightful read and does more than its share in reviving memories of the era when broadcast engineering was truly "fun," and a time when "new developments" didn't just involve the creation of some improved "code" or the upgrading of a microprocessor to two. (For those who missed it, Ampex and RCA, for many years, were the top attractions at NAB, with attendees queue-ing up at respective booths just to see what had happened during the past year in the "can you top this?" videotape category.)

Readers should keep in mind though that "Many Threads" is more than just a compilation of RCA's broadcast division history based on personal recollections. Luther has also created a philosophy of engineering and engineering management. And the book too is Luther's autobiography, presenting a highly detailed look into his personal life—hobbies, marriage, divorce, death of a child and other defining moments in his long life (he was born in 1928). If I have to fault "Many Threads" at all, it's because it sometimes told me more than I really wanted to know. But this is an autobiography and it certainly is the author's prerogative to include such detail. Readers are free to omit chapters of a personal nature and focus strictly on Luther's RCA years if they wish.

I can heartily recommend "Many Threads" and hope that it will serve as the catalyst for even more such works from those who spent their engineering careers in television, and helped shape it into the vast and ubiquitous medium that it has become. (Any takers from RCA's other early television rivals, Dumont and GE?).

Luther's book is available through amazon.com or a download can be purchased fromLulu.com. See his Web site—www.archluther.com—for details.

Arch Luther is currently president of Arch Luther Associates, a California-based consulting firm. "Many Threads" is his 12th book.