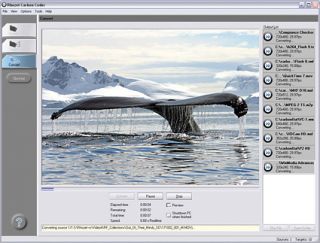 OTTAWA—Automated format conversion—aka automated transcoding—has become a necessity for today's multiplatform broadcasters. It is the technology that automatically converts programs and commercials formatted in 1080i to 720p (or vice versa), or translates them into formats suitable for the Web and mobile viewing.

"Automated transcoding lets your system automatically access content from your Pitch Blue or DGFastchannel digital media receiver and convert it into the formats you need for distribution," said Sam Blackman, CEO and co-founder of Elemental Technologies, a Portland, Ore.-based developer of transcoding technologies.

"Automated transcoding also supports dragging-and-dropping video files into a folder, where the system grabs the files, converts them, and then loads them to their appropriate playout servers," adds John Pallett, director of product marketing for Telestream in Nevada City, Calif. "It allows you to manage and serve multiple distribution platforms without having to increase staff and systems."

"This is why accurately determining how much capability you need is key," said Tom Lattie, Rhozet General Manager at Harmonic in San Jose, Calif. "First, you must decide which platforms you need to service, and then buy the automated transcoding system that meets these requirements with a little headroom to spare."

Automated transcoding is now commonplace with TV broadcasters both large and small; broadcast group or network.

Case in point: "We use automated transcoding for file-based commercial, program and news content delivery," said Reed W. Wilson, executive director of technology for Belo Corp. in Dallas. "We use Telestream Traffic Manager. It allows us to aggregate all our commercial content from all the different spot providers in a automated fashion, check that content from one application and then assign the content a local house number and directly transcode it to the proper file format."

CBS News transcodes dozens and sometimes hundreds of files daily, according to Brian Kennedy: CBS News' director of digital newsgathering. "The bulk of the work is done through automated transcoding... [We handle] everything from Flip camera video to pro res, and a fair amount of video that originates on web sites."

Elemental Live from Elemental Technologies
Like Belo, CBS News uses Telestream transcoding technology; specifically FlipFactory. "The pros of the automated technology are that the FlipFactory solution provides producers and editor with an easy solution for transcoding which doesn't tie up their editing client," said Walter Leiding, CBS News' managing supervisor of digital technology. "The con of this is that we currently only have one FlipFactory and it can and does get overloaded with a long queue of files."

HOW MUCH IS NEEDED?

Buying the appropriate 'Goldilocks' version of transcoding—not too much, not too little—starts by thinking through your company's format conversion needs. Now the ability to go back and forth between 1080i, 720p and 480p (SD) is an obvious requirement for any station. As for the Web and mobile? That's where careful thought really come into play.

"It is possible to save money with inexpensive tools supporting only a few Web formats, such as Windows Media or Flash," said Mike Nann, director of marketing and communications for Digital Rapids, a Markham, Ontario-based developer of encoding and streaming technology. "But if you make your choices too narrowly, you could end up cutting yourself off from potential viewers on more devices like iPhones and iPads. And if the same tool that you use for Web transcoding also supports your playout servers, that's even better. Meanwhile, considerable manual labor—and thus money—can be saved with a consolidated solution that handles the entire transcoding process, and that plugs seamlessly into your production chain."

Maybe You Don’t Need Transcoding at All Wouldn’t it be great if you didn’t have to deal with transcoding; if you could just ingest video from numerous sources, secure in the knowledge that it would playback without a hitch? Evertz says that their new NativPlay feature—offered on the new Evertz Media Server (EMS) platforms— provides this very capability.

Evertz EMS Media Client
While Senior Director of Product Development John L. Pittas declined to divulge details about the patent pending technology, he said that “basically, NativPlay employs some clever metadata processing to access video in a wide range of formats, including MPEG2, MEPG4, MXF, TS, and many others. You can play the video directly as is; convert it to your operation’s native video format—or to alternative platforms for use on the Web and other distribution systems. The bottom line: When we say our EMS platform is codec and multiplex agnostic, we mean it.” BROADCASTER'S VIEW

Both Belo Corp. and CBS News have very clear ideas about which automated transcoding capabilities are must-haves.

"A good transcoding program must have the ability to transcode all common file formats; .mov, wmv, Flash, MPEG-1, MPEG-2, MPEG-4, and JPEG-2000," said Belo's Wilson. "It should also automatically monitor FTP sites for new downloads, include audio loudness control and provide support for 608 and 708 closed captioning."

"It must have the codecs to serve, simultaneously, both editing programs [Final Cut, Avid, Premiere] and web/mobile formats," adds Kennedy with CBS News. "Broadcast is driving the other direction than most on the transcoding street. While many use it to deliver to mobile and web, broadcast uses it to take from those compressed formats back to broadcast."

Adam Goldfried, CBS News' manager of nonlinear editing operations prefers the simplest automated transcoding. "In this vein, transcoding just-haves include being able to work with the existing production network/dropbox setup. It also needs to let you create presets easily. It's really annoying having to search through parameter submenus to find important options; especially if it's encoding from production to web/mobile. Options like VBR vs. CBR, bitrate, and single/two pass are often buried under a scroll down menu."

As for improvements to current technologies, Leiding at CBS News would like to "a single central ingest solution for all types of files that would convert anything to anything." Goldfriend is looking for better playback apps. "f4v is a great example. It's a fantastic compression scheme and looks great for web embedding, but ever try to play a file back on your desktop? You'll be searching for an app to download," he said.