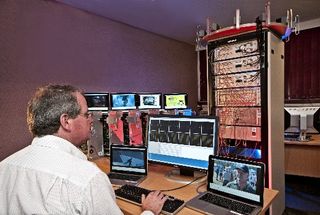 CANBERRA, AUSTRALIA: Engineers in Australia have figured out how to use the existing broadcast TV infrastructure for broadband transmissions.

CSIRO said individual signals take the form of a “focused beam” using a technique patented by the organization and dubbed “Ngara.” The word is an Aboriginal term referring to listening, hearing and thinking.

The beam-focused transmissions allow for spectral efficiency, which in turn allows for a robust wireless broadband signal. The Ngara system has been demonstrated to support six users uploading at 12 Mbps with no data-rate degradation. Spectral efficiency is said to be 20 bits per second per hertz over a 7 MHz TV channel. (U.S. TV channel’s are 6 MHz.)

The system is being developed to extend broadband to Australia’s rural areas. Users would attach wireless modems to their existing TV antennas. The CSIRO engineers are testing the downlink part of the system, also expected to run at 12 Mbps. Average download speeds in the United States are around 3.1 Mbps.
-- Deborah D. McAdams
(Image by Geoff Ambler/CSIRO)

See... “Broadband coming wirelessly to the bush” from CSIRO, and “CSIRO introduces W-Fi to your TV antenna” from ZDNet Australia.