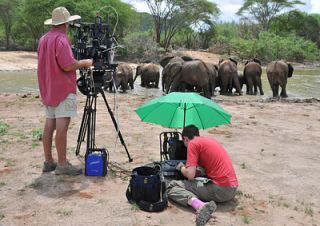 LONDON: Anton/Bauer recently went along for a wild ride in Kenya for the production of a 3D pilot based around elephants. Innovative 3D production company, Inition, used Anton/Bauer’s Cine VCLX and HyTRON 140 batteries to shoot the pilot for Deeble and Stone’s forthcoming 3D wildlife film, “Distant Thunder.”

The Deeble and Stone Productions’ project follows a herd of elephants as they struggle to survive in the face of climate change. To date, the “Distant Thunder” 3D pilot has screened at BAFTA in London, followed by screenings in Cannes, Paris, Seoul, Amsterdam, the Jackson Hole Symposium in Denver and at the Wildscreen Festival.

Campbell Goodwille from Inition said, “filming in the wilds of Africa is tough, it’s very hot and there is a lot of dust blowing around. This shoot really put our equipment to the test.... You need another camera, rig motorization and additional lens control systems [with 3D]. It’s not your ordinary shoot.”