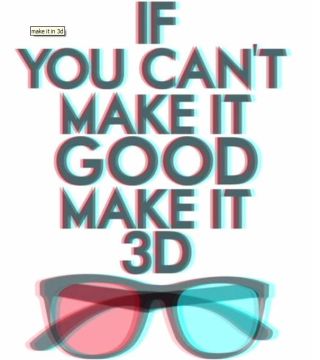 CYBERSPACE: Not everyone in Hollywood is buying into the 3D craze. A few directors are making it known they're not mad about the format. J.J. Abrams, director of “Star Trek,” and showrunner Joss Whedon are two such naysayers, The New York Timessays. Both panned making 3D films at the recent Comic-Con in San Diego, Calif.

Abrams mentioned how visually dark 3D is, because of the glasses that block out specific colors of light. Whedon said he “loved” watching 3D, but he opposed MGM’s intention to convert the horror film he has in production to 3D. Both directors said shooting in 3D simply adds difficulty to making a movie.

Around 60 3D theater releases are planned for the next two years, the Times said. Around 5,000 screens are expected to be 3D ready by the end of this year.

Will Farrell and Adam McKay gave 3D production a cheeky backhand in an MTV interview about their upcoming film, “The Other Guys.”

“We’re shooting on six-hour Maxwell tapes,” Ferrell said. “These have yet to be released to the marketplace. What you get, is... you get six hours of play...”

“This is standard grade right here,” Farrell continues, holding up a cassette, “but the movie is being shot on these videocassettes and then being transferred to a sketch artist, who is actually storyboarding every frame of film. That is being filmed. That is then being downloaded to a DAT--a digital-audio tape. It is then being put into a microprocessor and sent over to a lab in South Korea. And then into anime...”

“Which then goes to a projector screen, which then takes it into 34 millimeter, live-action regular film,” McKay says. “It increases the steps, but with each of those steps there’s a chance for creativity, there’s a chance for process, reinterpretation. What we’ve found is it drives the cost way up, and the margin of error goes way up. Quite frankly, we’re getting some awful-looking film out of this. But with any new process, you’re going to have that discovery; that R&D sort of phase.”

“In today’s financial climate, people are looking for costs to go up,” Farrell adds, “and that’s what we’re getting done.”

“We also screwed up, we used the wrong grade of film, the wrong stock,” McKay says. “We’re shooting this in drive-in film stock. So this movie can only be shown in drive-ins...”

The MTV video of the pair is at MTV’s Movie Blog. (Thanks to Michael Silberglied for the share.)
-- DMcA